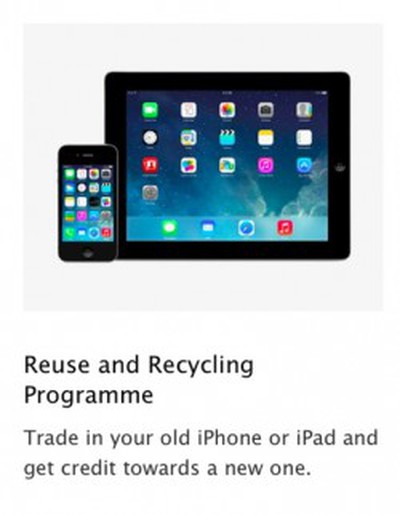 Apple today is expanding its iPad trade-in program to retail stores in several European countries, including France, Germany, Spain, and the UK. As spotted by Apfelpage.de and iPhoneAddict.fr, the program allows customers to recycle older iPad models at their local Apple retail stores and provides them with credits they can use towards the purchase of new devices.

Apple launched the iPad program last month in the U.S. and Canada on Earth Day as part of a larger green initiative to help consumers recycle old iOS devices. Customers can visit Apple retail stores and trade in their iPad 2, iPad 3, iPad 4 and iPad mini for store credit. The newer iPad Air and Retina iPad mini are not yet eligible for redemption.

The company has not revealed how much it will pay for these recycled devices in its international stores, but the pricing likely mirrors the existing trade-in program available in the U.S., with reduced prices for older devices and those in poor physical condition. Though not confirmed, Apple also may accept broken and non-working devices for free, providing a way for customers to responsibly recycle these devices.

The iPad program is similar to an existing in-store iPhone recycling program that debuted in the U.S. last August before expanding to the UK a few months later and several more European countries and Canada last month.

Philip D
So in Europe we are charged 40-60% more for our Apple devices compared to the US, but surprise, surprise, the recycle price in both places is the same. :p
Score: 4 Votes (Like | Disagree)

Robert.Walter
May accept broken broken or non-working iPads for free?

I thought under EU recycling rules that the manufacturer has to take these types of items back at end-of-life for free (because the customer paid for this ability in the purchase price); isn't this the case?
Score: 2 Votes (Like | Disagree)

The Doctor11
Yay! But I would never give up my old devices.
Score: 2 Votes (Like | Disagree)

Southern Dad
We have a better recycle program...

Works great and everyone stays happy. However, next upgrade we may have to figure out where to sell 5-year-old's iDevices.
Score: 1 Votes (Like | Disagree)

CrazyForApple
I'm surprised it wasn't already in the UK
Score: 1 Votes (Like | Disagree)
Read All Comments

Monday June 21, 2021 7:17 am PDT by Hartley Charlton
Users appear to be underwhelmed by Apple's upcoming iOS 15 and iPadOS 15 updates, according to the findings of a new survey by SellCell. The survey asked 3,000 iPhone and iPad users, evenly split between men and women, aged 18 or over in the United States, what they thought of iOS 15, iPadOS 15, and the naming of the upcoming iPhone 13 lineup. Over 50 percent of all of the survey's...
Read Full Article • 398 comments

Monday June 21, 2021 6:33 am PDT by Joe Rossignol
Apple will likely unveil its next-generation "iPhone 12s" or "iPhone 13" lineup in around two and a half months from now, and ahead of time, Taiwanese research firm TrendForce has outlined its expectations for the devices. A summary of TrendForce's expectations:Apple will unveil four new iPhones in September, including a mini model, a standard model, and two Pro models. September is the...
Read Full Article • 60 comments