Apple will be celebrating Earth Day 2014 next Tuesday, April 22 throughout its various retail locations and at its main campus, reports 9to5Mac.

The company will color its logos in green for the occasion, as employees will wear special shirts with an event planned at Apple's headquarters at 1 Infinite Loop in Cupertino, California. Apple last celebrated Earth Day in 2006 by holding a free computer takeback program in honor of the event.

Apple has remained active in its environment efforts throughout the past few years, which include powering its data centers with 100% renewable energy, expanding its recycling program, and reporting on its carbon footprint. Last May, Apple also hired former Environmental Protection Agency chief Lisa Jackson to lead the company's environmental responsibility efforts.

Environmental activist group Greenpeace also featured Apple as a "green energy innovator" in its latest report earlier this month, praising the company for its commitment to renewable energy after taking issues with previous efforts.

Look at all the admittedly beautiful but incredibly wasteful packaging on Apple products.

Such as?
Apple simplified their packaging pretty early while competitors had huge boxes.

This was wasteful (right): 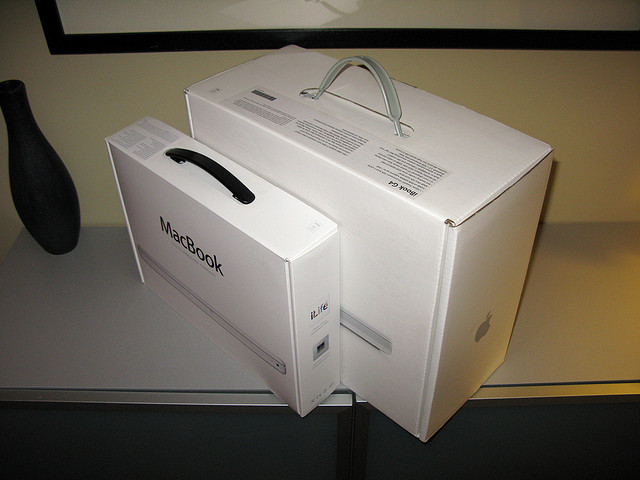 justinthesommer
I definitely support them for doing this... if I had billions of dollars lying around I'd want to put it towards something to better humanity. Right On Apple! Staying hungry, staying foolish, going green!
Score: 4 Votes (Like | Disagree)

waldobushman
First impression. The icons for apples earth day looks like icons from Android. Anyone else think so?
Score: 3 Votes (Like | Disagree)

Glad to see them taking the lead on this. We take too much of our environment for granted.


Look at all the admittedly beautiful but incredibly wasteful packaging on Apple products.

Picking on Apple for wasteful packaging defeats the whole argument. Apple is not even in the top 90% of the offenders. When places like Greenpeace protest Apple, I lose all respect for Greenpeace's as an organization. Go after the real offenders that don't give a crap, not the companies that are trying.
Score: 3 Votes (Like | Disagree)

Chupa Chupa
Fitting the official color of Earth Day is the color of money. :D
Score: 3 Votes (Like | Disagree)
Read All Comments

Tuesday April 13, 2021 9:04 am PDT by Juli Clover
Following an overnight leak by Siri, Apple today officially announced that it will be holding a special "Spring Loaded" event on Tuesday, April 20 at 10:00 a.m. Pacific Time at the Steve Jobs Theater on the Apple Park campus in Cupertino, California. As with all of Apple's 2020 events, the April 2021 event will be a digital-only gathering with no members of the media invited to attend in...
Read Full Article • 254 comments