Apple yesterday posted a job listing for a "Buzz Marketing Manager" based out of New York (via Dwight Silverman and Business Insider), with the description outlining a position responsible for managing such areas as product placement in film and television and fostering relationships with "high-profile influencers" to promote the Apple brand.

- Product placement in film & television. Work with the creative side of film & TV to place Apple products. This includes getting necessary approvals, managing and trafficking product inventory, following up with studios, and monitoring media for successful placements.

- Build and maintain relationships with high-profile influencers. Influential Apple users could be directors, actors, artists, athletes, designers and select brands or institutions. Determine which relationships have potential to maximize benefit to Apple.

- Leverage relationships to book events at Apple Store Soho. Collaborate with Apple Retail, PR and iTunes to ensure maximum positive outcome for the effort. Produce a podcast for each event into iTunes and maximize the promotional value of the content through PR efforts and partner channels.

Apple describes the role as new and reporting to the head of worldwide Buzz Marketing, suggesting that Apple is expanding its efforts in the area.

Buzz marketing has been receiving significant attention recently, in large part due to Samsung's aggressive efforts in the area led by the "Oscar selfie" posted by Ellen Degeneres. The stunt, which became the most retweeted Tweet in history, was quickly revealed to have been coordinated by Samsung, which was a promotional sponsor 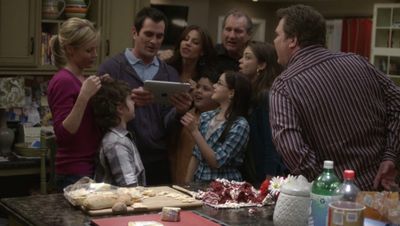 Modern Family's "Game Changer" episode with iPad promotional tie-in
Apple's Buzz Marketing program has been in place for two decades, however, having been developed and led by longtime Apple employee Suzanne Lindbergh until her departure for Jawbone last October. On her LinkedIn profile, Lindbergh highlights her role in helping produce over 1,500 events for Apple's in-store Meet the Filmmaker/Actor series, as well as her work on Apple's original "Hello" teaser ad for the iPhone and a promotional tie-in for an episode of Modern Family days before the launch of the original iPad.
[ 58 comments ]

Rogifan
So Apple has a job opening within a team that's existed for two decades and Business Insider (and now MacRumors) thinks this is newsworthy for what reason exactly (yes I know that is a rhetorical question ;))?
Score: 9 Votes (Like | Disagree)

blips
It is great to see all the MacBooks in shows with the logo covered up. You can tell it is an Apple product even without seeing the Apple.
Score: 7 Votes (Like | Disagree)

zipur
Heck most Samsung phones look like "I"devices anyway. Even your example could be a Samsung to the uninformed eye. Would that money be better spent Getting Your Product Out! I been waiting for months of the new IPAD. I am still hoping/waiting for an updated MBP 17inch. (I know not gonna happen)
Score: 4 Votes (Like | Disagree)

keterboy
Very pleased to hear. And that episode of Modern Family was hilarious :D
Score: 4 Votes (Like | Disagree)

So Apple has a job opening within a team that's existed for two decades and Business Insider (and now MacRumors) thinks this is newsworthy for what reason exactly (yes I know that is a rhetorical question ;))?


Easy solution. Host your own blog site and post the news you feel worthy.

Strategic and tasteful placement of Apple's products in TV/Film is definitely welcome.


I loved that episode of Modern Family! The Big Bang Theory one was kind of creepy though - a dependant (loving) relationship with a phone accessory is a bit much.

However, the king of tasteful Apple product placement has to be Pixar with Toy Story, Wall-E and others.
Score: 3 Votes (Like | Disagree)
Read All Comments