iWork for iCloud Updated With Retina Support and Design Improvements, iOS and Mac Updates to Follow

Following the launch of Microsoft's Office apps for iOS, Apple is updating its iWork apps for iCloud, Mac, and iOS, adding some major improvements to compete with Microsoft's Excel, PowerPoint, and Word.

As noted by 9to5Mac, Pages, Numbers, and Keynote for iCloud have gained updated designs for their document, spreadsheet, and presentation editors along with support for Retina displays. All three apps have also been updated with the ability to share view-only documents and to open documents directly from iCloud Mail.

A pop-up within the iWork for iCloud apps indicates that Apple also has plans to update Pages, Numbers, and Keynote for both iOS and Mac, with the updates being required to open documents edited in iCloud. 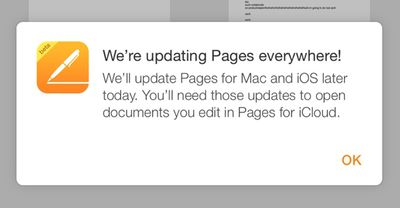 Apple last updated its iWork suite of apps across all platforms in January, adding several new features to improve the software and return functionality that was removed when the new iWork apps were introduced back in September. Apple pledged to improve the apps back in November after facing significant user criticism from power users.

Update 2:00 PM PT: Keynote, Numbers, and Pages for Mac are all available for download, with each update adding a slew of new features to the apps, including a new "view only" setting that allows users to share documents that can be viewed but not edited. The updated versions of all three apps contain a slew of new features.

Keynote, for example, has gained improved Presenter Display layouts and labels along with new transitions and builds, among other features, while Numbers has new printing options, custom data formats, and custom table styles. Pages has copy-paste style improvements, improved AppleScript support, and better placement of inserted and pasted objects. All of the updates can be found in the Mac App Store.

Updated versions of Pages, Numbers, and Keynote for iOS are also available for download from the App Store, adding the same "view only" setting that lets users share documents that can be viewed but not edited, along with many other new features.

iWork has a loooonnnnggggg way to go before people can ditch Microsoft Office.


That isn't necessarily true. For many people, all they use is the basic functions of Word, PowerPoint, or Excel. And although I can' stay I'm a heavy iWork user, from my limited experience, it does just fine for the basics. I fit into the category of I don't use "office" products enough to pay 100 bucks a year, so iWork will do just fine.
Score: 22 Votes (Like | Disagree)

iBlazed
iWork has a loooonnnnggggg way to go before people can ditch Microsoft Office.
Score: 17 Votes (Like | Disagree)

So does this mean we get to leave beta now?


Beta? I'd be happy to make it out of proof of concept to alpha..
Score: 10 Votes (Like | Disagree)
Read All Comments