Apple is ready to open its first retail store next week in Turkey, with a grand opening gala that may feature Apple CEO Tim Cook and Turkish President Abdullah Gül. Located in Istanbul's Zorlu Center Shopping Center, the retail store will open at 10:00 AM on Saturday, April 5, 2014, reports Elma Dergisi. 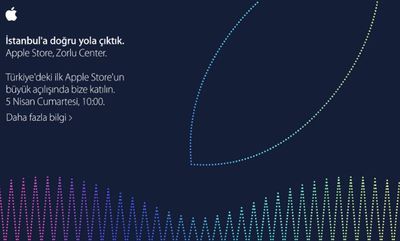 The Turkish store occupies approximately 20,000 square feet in the heart of Istanbul's popular, multi-use shopping center. The Zorlu Center store is thought to feature a cubic glass ceiling, glass sides and in-store services such as a dedicated "Family Room" floor and dual Genius Bars, reports 9to5Mac. The structure is currently hidden behind barricades until its official debut.

This Zorlu Center store is the first of several retail stores planned for Turkey as Apple makes inroads into this new market. Apple also met with Turkish government officials to equip Turkish school children with 10.6 million tablets in a new education initiative to bring cutting-edge technology into schools.

Though negotiations appeared to be favorable for Apple, this bid eventually was awarded to Turkish company Telpa, which is providing tablets from General Mobile, a Turkish-owned company operating out of the United States.

emir
Coloured dots forming the top quarter of the Apple logo on the banner represents the iconic Bosphorus bridge's lights. The bridge connects Europe to Asia. Istanbul literally is a city located in both Europe and Asia. Here's a photo of the bridge.

Also Apple is said to open 4 more stores in Turkey by the end of 2015. One, located in the Asian side of Istanbul was photographed under construction, in a mall called "Akasya".

I'm pretty excited about this cause it means decent Apple customer service, Apple care, international guarantee and probably product launches simultaneously with the world. Up until now it has always been US, UK, Germany, France launch, then second tier country launch, then 3rd and then Turkey. If iPhones were launched early-Sep, it would officially arrive to Turkey mid-november. If this could move us up to at least 2nd tier it would be amazing.

[politics]
As a side note; I'm super annoyed and angry about the Turkish government's unacceptable demonisation of social media and I hope they'll get the answer on this Sunday's elections. Most of the people can still connect to Twitter and youtube just by changing their DNSs anyways but this attitude is non-democratic and unacceptable. In my eyes, the prime-minister is not legitimate anymore because he is literally above the law. [/politics]
Score: 15 Votes (Like | Disagree)


How much you wanna bet this post will get moved to the politics forum?
Score: 6 Votes (Like | Disagree)

valdikor
If I were Apple, I would hold off the opening until the free internet speech "issue" is resolved and the government comes to its senses. Apple shouldn't turn a blind eye to these matters.
Score: 6 Votes (Like | Disagree)
Read All Comments

Tuesday September 27, 2022 10:24 am PDT by Juli Clover
The most recent beta of iPadOS 16.1 expands the controversial Stage Manager feature to older iPads, allowing it to work with iPad Pro models that have an A12X or A12Z chip, according to information Apple provided to Engadget. The beta also removes the external display support from Stage Manager for the current time, with the feature set to return in a later iPadOS 16 update. Apple's...
Read Full Article • 262 comments