Just five months after its release, OS X Mavericks is seeing adoption rates in the range of 40 percent to almost 50 percent depending on the tracking source. The significant growth in Mavericks users demonstrates the benefits of Apple's move to drop the price of its latest OS X update to zero in an effort to encourage users to upgrade.

Analytics firm Chitika is out with a new report today showing Mavericks usage at 40 percent of page impressions in the United States and Canada over the week of March 17-23. Apple's three previous operating system versions split almost all of the remaining 60 percent of the Mac user base nearly evenly. 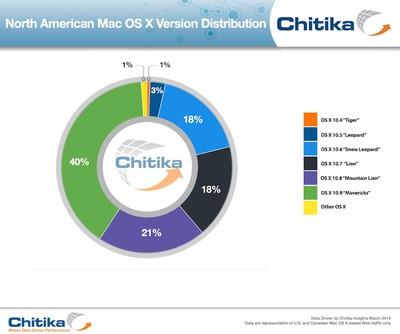 The report notes that while Mavericks is seeing strong upgrade rates relatively to previous versions of OS X, Mac adoption rates are much slower than seen for iOS, where 85 percent of devices are now running iOS 7. This disparity is likely due to a number of factors, including longer lifespans for Macs that may leave a higher percentage of machines ineligible for the latest OS version, as well as a more varied user base than may not be as tech savvy as mobile users and thus less likely to upgrade.

Chitika is not the only analytics company tracking OS X usage, as GoSquared continues to maintain its tracker offering a real-time look at the distribution of OS X versions appearing on its network of sites. GoSquared is seeing an even higher rate of adoption for Mavericks of around 48 percent, with a similar even split of the three previous versions all around 15-16 percent.

Net Applications is yet another analytics firm with a significant user base to measure data from, and that firm saw Mavericks with a 45 percent share of the OS X base in its February data.

BornAgainMac
I wonder why the Lion and Mountain Lion users didn't upgrade? The Snow Leopard group is understandable.
Score: 14 Votes (Like | Disagree)

SvP
That's way slower than i assumed it would be
Score: 9 Votes (Like | Disagree)

I wonder why the Lion and Mountain Lion users didn't upgrade? The Snow Leopard group is understandable.


Many Snow Leopard users did not upgrade, because they still need the ability to run PowerPC native applications on their Mac. This ability was taken away in Lion, and Mountain Lion as well as Mavericks do not allow it either. To run a PowerPC native app, you must have 10.6.8 or earlier.

A prime example of this is AppleWorks. It will not run on Lion or later, since Rosetta support has been pulled from the OS.
Score: 7 Votes (Like | Disagree)
Read All Comments