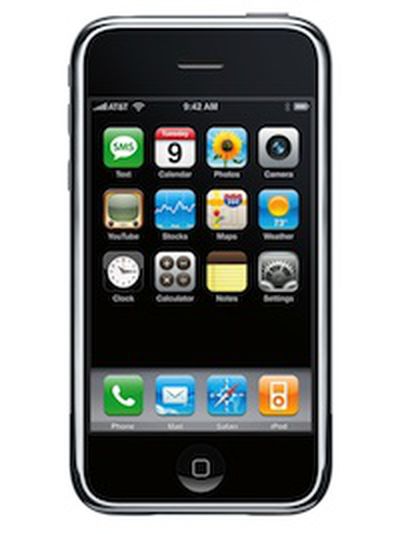 A few new insider details on the development of the original iPhone have come to light thanks to Apple senior software engineer Greg Christie, who gave an interview with The Wall Street Journal with permission from Apple, ahead of a new patent infringement trial against Samsung that is set to begin soon.

According to Christie, who joined the secret "purple" iPhone project after an invitation from Scott Forstall, his team was responsible for many key iPhone elements, such as sliding to unlock, placing calls from the address book, and more. He and his team spent countless hours perfecting details like the speed of scrolling, and the feel of bouncing back at the end of a list.

He said his team "banged their head against the wall" over how to change text messages from a chronological list of individual messages to a series of separate ongoing conversations similar to instant messaging on a computer.

He also said the team was "shockingly small." Apple declined to specify the number of members.

Christie gave two progress reports to Jobs each month, in a small, windowless meeting room at the company's Cupertino headquarters. Few people had access to the room and even cleaning people were not allowed to enter. The secrecy surrounding the original iPhone's design was incredible, with Jobs even requiring employees to encrypt images of the device.

Jobs was initially unhappy with Christie's progress on the device, and gave his team two weeks to improve.

"Steve had pretty much had it," said Mr. Christie, who still heads Apple's user-interface team. "He wanted bigger ideas and bigger concepts."

Christie's team was able to impress Jobs within the deadline, later giving presentations to Apple's design chief Jony Ive and Apple director Bill Cambell, who said the iPhone "would be better than the original Mac." All three approved the 2005 design, kicking off a "2 and a half year marathon" where the iPhone was designed from the ground up with Jobs clearing every minor detail, as has been noted in several previous reports of the iPhone's development.

Christie's details on the creation of the original iPhone come just ahead of a second major patent infringement lawsuit with Samsung, set to begin later in March. Apple initially accused Samsung of grossly infringing on both its patents and its designs in 2011, a lawsuit that resulted in a $890 million penalty for the South Korean company in the United States.

While the first lawsuit covered older devices, the second U.S. patent lawsuit between the two companies covers more recent products like the Galaxy Note II, the Galaxy S III, the iPhone 5, and the iPad 4.

The full interview on The Wall Street Journal, which is well worth reading, also includes additional tidbits on the secrecy behind the development of the iPhone, major last minute changes, and details on the original iPhone's unveiling.

That is why I'm holding on to iOS6 and Snow Leopard for as long as I can
Just like my Mac 128. When Scully produced those awful ProFormas I had to switch to Windows.
Scully without Jobs reminds me of Ives and Cook of today.


So you think Steve Jobs is the genius that he is, but is incapable of choosing leadership to keep his vision alive? I think that's pretty insulting to Jobs true brilliance, which was talent management/recruiting and having good "taste" in people, not just products.

Scully and the Apple of 1985 was not an organization that Jobs set up himself. First of all, he was much younger and less experienced. Second, the board of directors didn't allow Jobs to have that level of control over the organization. Scully was approved by Jobs to be CEO due to inexperience as well as pressure from the board, who were money hungry types and not visionaries. The only group Jobs assembled entirely himself was the Macintosh team, only 100 people. That was all he was allowed to do.

2014 Apple is a completely different beast than 1985. Let alone the fact that Tim Cook has been Jobs' right hand man for over 15 years while Scully wasn't. This is an organization assembled from top to bottom by Steve Jobs himself. From the leadership to the structure to the culture to the processes, all Steve Jobs. Jobs even created internally the Apple University during his last few years.

To compare Apple today to the Scully Apple is a complete slap in the face to the mighty Steve Jobs you think was irreplaceable. It's just funny to me, people treat him like a God, but then slap him in the face when it comes to his ability to leave his creation in capable hands.

TheRainKing
How Apple miss Steve and his eye for detail and perfectionism.
Score: 16 Votes (Like | Disagree)

ChrisTX
It's funny how many of the technologies from the original iPhone we often take for granted in our current smartphones. I even recall users of Blackberries and other various smartphones poking fun at iPhone users and their "pinchers" because of the touch capabilities and pinch to zoom. Oh how the iPhone changed it all. What a great read!
Score: 16 Votes (Like | Disagree)

Clubber
Ugh. Ran into a paywall.
Score: 15 Votes (Like | Disagree)

I am tired of hearing "designed from the ground up"


why? :confused:
Score: 14 Votes (Like | Disagree)
Read All Comments