Director David Fincher, who is in talks to direct the Aaron Sorkin-scripted Steve Jobs biopic based on Water Isaacson’s biography, is hoping to cast Christian Bale in the leading role as Steve Jobs, reports TheWrap.

Though Fincher has not yet officially signed on to direct the film, he has allegedly said that he will take on the project if Christian Bale plays Steve Jobs. Bale has not been approached about the possible role, but he has reportedly been a front runner for the position due to his undeniable resemblance to Jobs. 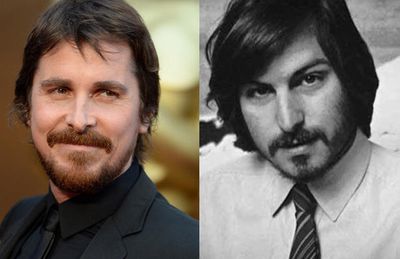 While Steve Jobs is a long way from Batman, Bale has been considered a prime contender to play the tech superhero since the project was first announced due to his physical resemblance to the Apple co-founder.

Bale has not been approached to play Jobs yet, as the actor is taking a step away from the business to spend time with his family now that he has wrapped the role of Moses in Ridley Scott’s "Exodus," which is expected to have him back in the awards conversation after "American Hustle."

David Fincher, who may direct the yet unnamed biopic, was the director behind The Social Network, another Silicon Valley-based film that won three Academy Awards and was nominated for five more, including Best Picture and Best Director.

Sorkin completed the script for the upcoming Jobs movie back in January, and the film is said to take place across three continuous 30-minute scenes at three different Jobs-led product launches.

The movie, which is still in the casting stages, has no set launch date at the current time.

Didn't the last Jobs movie bomb? Why make another?


That was a Ashton Kutcher movie, Not a Jobs movie.

This is the officially licensed Steve Jobs movie based on Walter Isaacson's Biography.

Ashtons version was rushed to be first to market. Sorkin and Fincher will do it right so that "it just works". ;)
Score: 14 Votes (Like | Disagree)

I don't wish to be crass but he is also a good choice as he can drop the weight needed to resemble someone who has terminal cancer.
Not many actors are physically or mentally capable of that.


Christian Bale is a phenomenal method actor. He will literally become Steve Jobs. In fact I wouldn't be surprised if he actually winds up creating a new Apple product.
Score: 11 Votes (Like | Disagree)

John Cleese would not make a particularly convincing Batman or Jobs IMO.

but he has reportedly been a front runner for the position due to his undeniable resemblance to Jobs.


I don't wish to be crass but he is also a good choice as he can drop the weight needed to resemble someone who has terminal cancer.
Not many actors are physically or mentally capable of that.
Score: 7 Votes (Like | Disagree)
Read All Comments