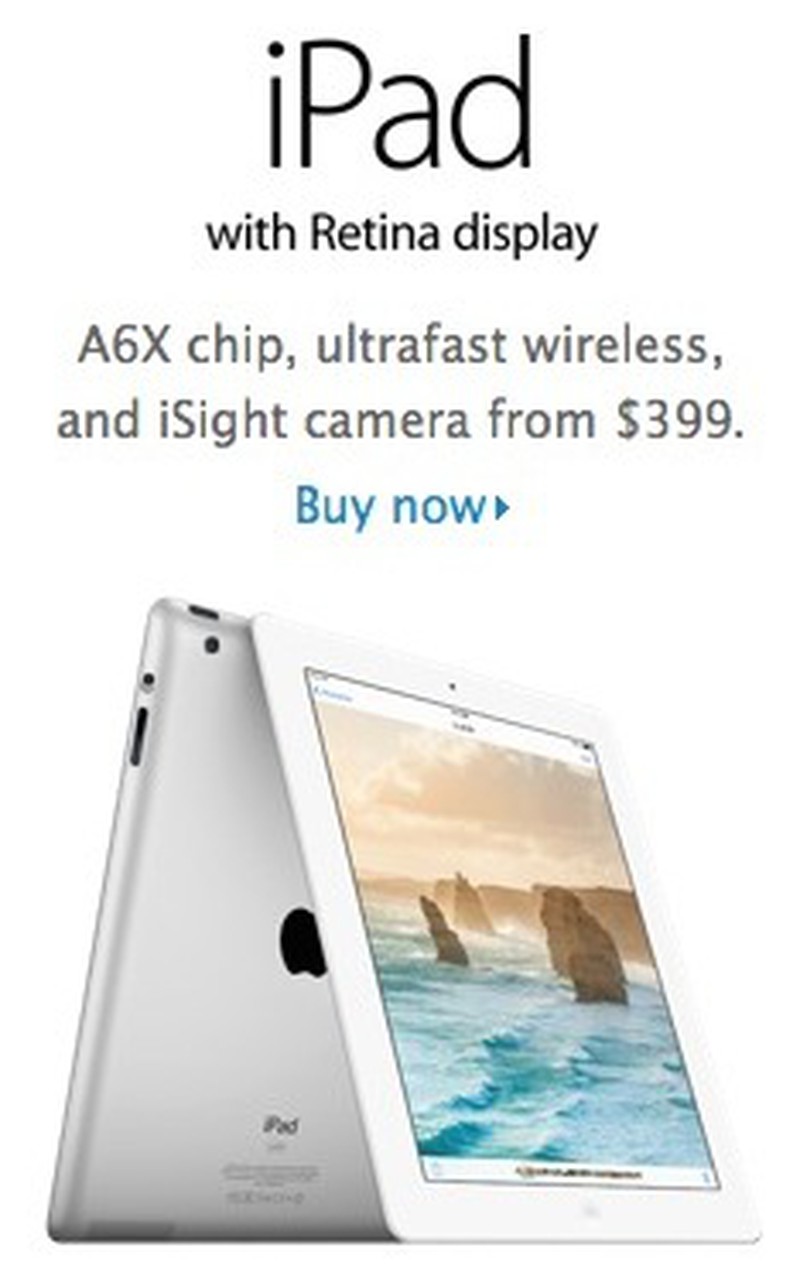 After the fourth-generation iPad reappeared on Apple's online storefront earlier today, the company has issued a press release confirming the return of the device to the company's product lineup. The iPad with Retina Display will replace the iPad 2 as the company's entry-level full-sized tablet option.

“Now for $399 customers can get iPad with a stunning 9.7-inch Retina display, fast A6X chip, and 5MP iSight camera, offering a dramatic upgrade in power, performance and value compared to the iPad 2 it replaces,” said Philip Schiller, Apple’s senior vice president of Worldwide Marketing. “The iPad line sets the gold-standard in mobile computing and all iPads have access to the largest and best ecosystem of more than 500,000 iPad optimized apps from the App Store.”

The 16 GB WiFi-only iPad 4 is available for $399, while the WiFi + Cellular model starts at $529 in the U.S., with both black and white color options available. The iPad with Retina Display will be sold through the Apple Online Store, Apple's retail stores and select Authorized Apple Resellers. Customers looking for additional storage capacity beyond 16 GB must purchase the iPad Air, which is available in 16, 32, 64 and 128 GB options.

Distribution of the new lower-capacity model is, however, rather limited, with Apple confirming to Fortune's Philip Elmer-DeWitt that the 8 GB model will only be available in the UK, France, Germany, Australia, and China.

mattopotamus
How are people complaining about this move? Clearly the ipad 4 is more suitable at $399 than the ipad 2 was.
Score: 23 Votes (Like | Disagree)

Bare
Better the iPad 4 as a cheaper option than the iPad 2. The iPad 4 is far more an appealing option for today's consumer.
Score: 22 Votes (Like | Disagree)

D.T.
This is a pretty decent idea. The iPad 4 is still a powerful tablet, it doesn’t have anything “missing” like the iPad 2 ... and it only gives up some small % of performance and dimension for $100 savings (if you’re only considering a full sized iPad).

td1439
Anyone who shelled out $400 for an iPad 2 in the last couple of months is probably fuming right now.
Score: 17 Votes (Like | Disagree)

Keebler
I think it's great!

I thought selling the iPad 2 was cheesy as it doesn't have the retina display, but the iPad 4 at 16GB is fantastic for that price point.

I read some of the messages and seen the comments about 'milking this line' or 'how innovative selling an older product'.

Look at it from this perspective - not everyone cares (or even knows) about the technical differences between the 4 and Air.

Does she care about having a ton of GB space to save movies or other stuff on?

NO. She may think GB means Green Bay for crying out loud. lol

Will she want a fantastic looking display to check her email and surf the web, receive texts from her grandkids when they're not able to visit.

Will she want a device that's incredibly easy to use?

Will the iPad 4 16 GB PERFECTLY suit that need.

YES! In a huge way. Especially at that price point.

My point is just because YOU may not agree with their decision and think it's stupid....don't think it won't sell.

I'm not saying this is perfect for seniors either. Think of parents looking for a Christmas gift for their kid who may not need more than 16GB. Lots of possibilities out there.

I don't think is Apple harming their own market share. In fact, I bet they sell more iPads now that they have a lower option Retina display. To me, this is just like a car manufacturer - you'll have people who will want to buy the high end vehicles and you'll have those buying the lower end.

Are their needs being met?

Are yours? Maybe not. So go buy that higher end option.

But maybe you'll see there are other view points and factors to consider.

Friday May 29, 2020 12:36 pm PDT by Juli Clover
There are tons of hidden features and shortcuts for Macs that Apple has built into macOS over the years, ranging from shortcuts to keyboard commands to other little hacks to make Mac usage just a bit simpler. In our latest YouTube video, we highlighted several of these tips and tricks, and some of them might just be new to you. Subscribe to the MacRumors YouTube channel for more videos. Tr...
Read Full Article • 71 comments