Musician and songwriter Neil Young, who also has experience directing, has been working on a competitor to Apple's iPod for several years now, which is now close to seeing a release date.

The PonoPlayer is a $399 digital music player that is designed to offer high quality sound, beating out Apple's iPod. The sound is described as "master-quality digital music at the highest audio fidelity possible," which allows listeners to feel the true emotion and detail of the music, "the way the artist recorded it." 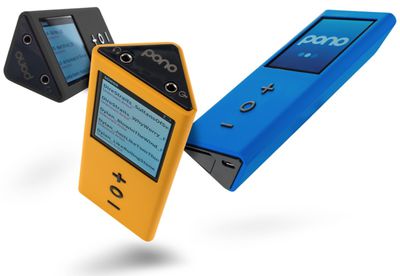 Young initially unveiled plans for the higher-quality digital music in 2012, after he revealed in an interview with AllThingsD that he had discussed high definition music formats with former Apple CEO Steve Jobs ahead of his death. Young has been in favor of higher definition music formats for several years, but such formats require larger files, which may have held Apple back from jumping on board.

When asked if Young had approached Apple about the idea, Young said that he had, in fact, met with Jobs and was "working on it," but that "not much" ended up happening to the pursuit.

Of note, Young made mention that Jobs was a vinyl fan, despite having helmed the company that would spearhead the way people listened to and purchased digital music.

Apple offers iTunes music in an AAC format at a quality of 256 kbps and while the company does support a lossless audio format, the files take up more space than AAC files and are not sold on the iTunes Store.

Young's PonoPlayer works in conjunction with the yet-to-be-released PonoMusic service, which pledges to "significantly improve the way you get to hear and feel your favorite music." The PonoPlayer itself will ship with 128GB of memory, storing from 100 to 500 high resolution albums.

As for Apple's line of iPods, several of the devices, including the nano, the shuffle, and the classic, have gone more than three years without an update. Apple did introduce a minor color change for some of the devices, but it appears the company may be planning to phase out several models. The exception may be the iPod Touch, which was updated with a new design in 2012.

During a recent conference call, Tim Cook called the iPod a declining category for the company, which has been overtaken by more popular offerings such as the iPhone and the iPad. "All of us have known for some time that the iPod is a declining business," he said.

The $399 PonoPlayer will be introduced to the public via a Kickstarter project that is set to go live later this week.

jonblatho
Is that a Pono in your pocket, or are you just happy to see me?

In all seriousness…whoever advised this business decision deserves a pink slip. Far, far, far too late to make a splash.
Score: 48 Votes (Like | Disagree)

jakebot
Are you sure this news story didn't get lost in a queue from 8 years ago and then accidentally get posted to the site today?
Score: 35 Votes (Like | Disagree)

Too expensive, too big, too late.

Oh...and kids today don't care that much about quality. They're happy watching a crappy video with crappy sound quality on YouTube. And they're happy with using the cheap earbuds that come with whatever device they buy.

And I'll be the first to ask...Does it come in Zune brown?
Score: 22 Votes (Like | Disagree)
Read All Comments