Six Apple executives received more than 30,000 shares of stock in the form of restricted stock units or RSUs according to a series of filings with the SEC. RSUs are typically issued to employees to encourage them to stay with the company. They are awarded in a similar way to stock options, but convert directly into shares of stock upon vesting.

At current prices, the awards are worth as much as $12.1 million per executive. 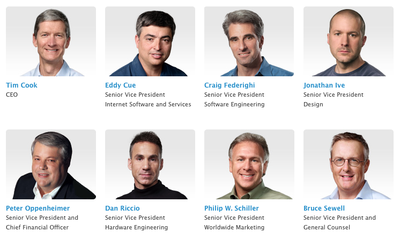 - 6,626 RSUs scheduled to vest on October 1, 2015, with that number subject to adjustment based on Apple's total shareholder return.

In June of 2013, Apple's board adjusted the company's executive compensation package to consider shareholder return, as compared to companies in the S&P 500, as part of senior management's bonus scheme. In this case, Apple executives can see their award increased by as much as 100%, or decreased to 0, depending on the company's performance.

Apple executives typically receive bonus awards every other year, with bonuses paid out over several years as part of the company's overall executive retention package. Executives who leave the company see their unvested RSUs expire. Tim Cook did not receive any awards as his compensation package is determined independently of his senior staff.

ScoobyMcDoo
and the circle jerk among the 1% continues...
Score: 12 Votes (Like | Disagree)

Razeus
I wonder if regular employees get anything. The rich get richer it seems.
Score: 8 Votes (Like | Disagree)

0xyMoron
and the rich gets richer...
Score: 6 Votes (Like | Disagree)

Actually, Ive probably got a similar award but for some inexplicable reason his compensation package does not get reported to the SEC even though his title is "Senior Vice President".

Clever, how does one reward their top execs if the stock is stuck well blow its all-time high? Create more.


You do realize there is a long vesting period right ? Not to mention, they aren't creating more stock. Apple is just issuing shares that it owns to to these employees.
Score: 2 Votes (Like | Disagree)

I wonder if regular employees get anything. The rich get richer it seems.


No, not even a christmas bonus.
Score: 2 Votes (Like | Disagree)
Read All Comments

Thursday September 29, 2022 12:38 pm PDT by Juli Clover
Tony Blevins, Apple's vice president of procurement, is set to depart the company after he made a crude comment about his profession in a recent TikTok video, reports Bloomberg. Blevins was in a video by TikTok creator Daniel Mac, who was doing a series on the jobs of people he spotted with expensive cars. After seeing Blevins in an expensive Mercedes-Benz SLR McLaren, Mac asked Blevins what ...
Read Full Article • 649 comments