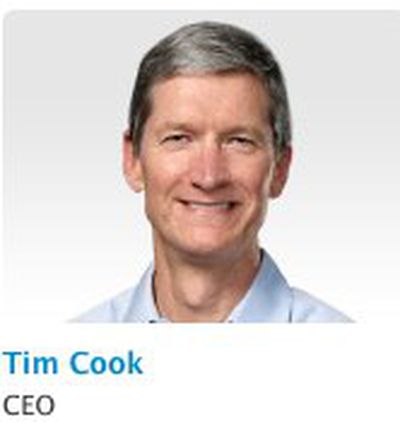 Apple's Board of Directors has elected to modify the award of restricted stock that Tim Cook received after being promoted to CEO in August 2011. The modification, made at Cook's request, changes the award of 1,000,000 restricted stock units -- originally supposed to be awarded in two lump sums over 10 years -- to a more performance-based compensation system.

A restricted stock unit, or RSU, is a form of compensation valued in terms of company stock, but the stock is not issued at the time of the grant. Instead, the recipient gets shares of stock at a later date, generally only if they are still employed by the company.

According to a filing with the SEC today, the Compensation Committee of the Apple Board of Directors approved the amendment of the award from August 2011, though the amendment does not change the fair value of the grant as of the day it was rewarded.

The Committee intends for future stock awards to Apple executives officers to be performance-based and Cook will lead by example. However, though normal performance-based compensation normally has both an upside and downside, at his request, Cook's award will solely have a downside component.

Under the adopted modification, Mr. Cook will forfeit a portion of the 2011 CEO equity award, which was previously entirely time-based, if the Company does not achieve certain performance criteria. While the Committee generally believes that a performance-based award should have both a downside and an upside component, at Mr. Cook’s request, the modification does not contain an upside opportunity for overachievement of these criteria. As a result of implementing a modification with only downside risk, the Committee has determined that a portion of the original grant should vest earlier than originally scheduled. This modification will not change the award’s original value for accounting expense purposes.

As a result of the changes Cook will receive at least 672,877 shares of Apple stock by the end of the award in 2021, with the possibility of 1,000,000 shares total if Apple continues to outperform its peers. The Form 8-K filing that Apple filed with the SEC today contains additional information about the modifications to Cook's award.

i don't think you get apple. You're probably the same shill who argued that apple didn't invent the iphone and invent the ipod then come around and argue apple is all about looks that you don't agree with. Realize that looks are opinions and accept that people can agree/disagree with you. This reminds me of when they released the ipad, OH JUST A BIGGER IPHONE LOL INNOVATION, or when they released an ipod touch LOL JUST AN iPHONE W/O THE PHONE or released the retina display LOL ALL "MARKETING" TALK

ayway, back on topic. this is suspicious to me as tim cook also recently announced the stock buyback. it's obvioulsy good to have it be incentive based if he believes stock price will be going up and apple certainly will make sure of this.
Score: 31 Votes (Like | Disagree)

The structure is all win and no lose for him, no matter how poorly he performs. What about that makes him a class act?

Because he already signed a contract that guaranteed him 1,000,000 RSUs so long as he kept the job. He voluntarily changed the terms so that if the shareholders suffer, he can lose as many as 600,000 of those RSUs.

He could easily--most would say "reasonably"--have asked for a tradeoff in the other direction. "I'm voluntarily putting 600,000 shares of contractually-guaranteed stock at risk if performance is bad, so how about I get something extra if performance is exceptionally good?" The board even said that for other executives, that would be the norm.

But he voluntarily said "no, I don't need the bonus if things go really well--just penalize me if they go badly." I would call that legitimately classy.
Score: 27 Votes (Like | Disagree)

benthere16
Similar to what Steve did

Steve Jobs famously made $1 a year and therefore relied on increasing stock price to make money. Tim's doing a similar move, essentially saying 'hey, if we're not doing well compared to others in the market, then don't give me as much stock as you already awarded me'.

In a country where CEOs get golden parachutes and bonuses that don't match performance, this is signal from Cook that he believes in the future of Apple and is willing to bet his stock on it.
Score: 24 Votes (Like | Disagree)


1. Maybe not to you.
2. Maybe to you.
3. Innovation does not mean you revolutionize the mp3 market, phone market, tablet market every year.

Anyway, what big changes do you expect with todays hardware available for mass production?
Apple always was pulling the full potential out of available hardware and making every single competitor follow their example.
Score: 24 Votes (Like | Disagree)

Worst Decision… Can't innovate if you're focused on stock price...

So you'd rather have a caretaker CEO who can focus on nothing and still get paid as much?

I see this as entirely positive with no real downside. The job of the board and the shareholders is to determine if he's innovating and to fire him if not. This is just an added bonus if the company does well (and, historically, Apple has prospered the most during times of innovation, so innovation and stock price aren't mutually exclusive).
Score: 16 Votes (Like | Disagree)
Read All Comments