As part of Apple's announcement earlier today regarding the launch of its new iOS vehicle integration at the Geneva International Motor Show, the company revealed that it has rebranded the feature from "iOS in the Car" to "CarPlay".

Curious about whether Apple had previously sought to protect the CarPlay name with a trademark application, MacRumors has investigated the situation and determined that Apple appears to have registered a shell company by the name of Carplay Enterprises LLC on November 14, 2013. 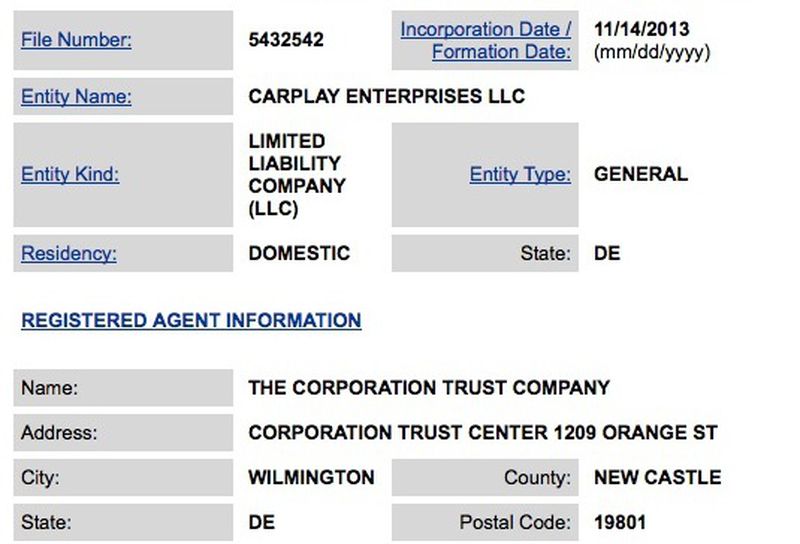 The company has no obvious link to Apple aside from the fact that it is headquartered at 1209 Orange Street in Wilmington, Delaware, where other Apple-related companies have also been listed. The building is, however, essentially a mail stop that serves as the headquarters for hundreds of thousands of companies seeking to take advantage of Delaware's business-friendly laws.

Its occupants, on paper, include giants like American Airlines, Apple, Bank of America, Berkshire Hathaway, Cargill, Coca-Cola, Ford, General Electric, Google, JPMorgan Chase, and Wal-Mart. These companies do business across the nation and around the world. Here at 1209 North Orange, they simply have a dropbox.

Less than a week after its formation, Carplay Enterprises began filing for trademarks on the "CarPlay" name, with applications in Australia, Norway, and a number of other countries coming on November 19 and the United States and several more countries following a day later. Apple's U.S. application seeks protection in three classes: Computers (including handheld devices, peripherals, and software), GPS navigation, and Computer programming.

The U.S. application lists as contact information a Gmail address and an attorney by the name of Robert Friedman who has no obvious connection to Apple, while the signatory on the application is listed as "not provided", suggesting that Apple was working quite hard to cover its tracks. Prior to the introduction of the iPad, Apple was discovered to have filed for a trademark on the name "iSlate" under a different shell company, with one giveaway being that the application was signed by an Apple employee. 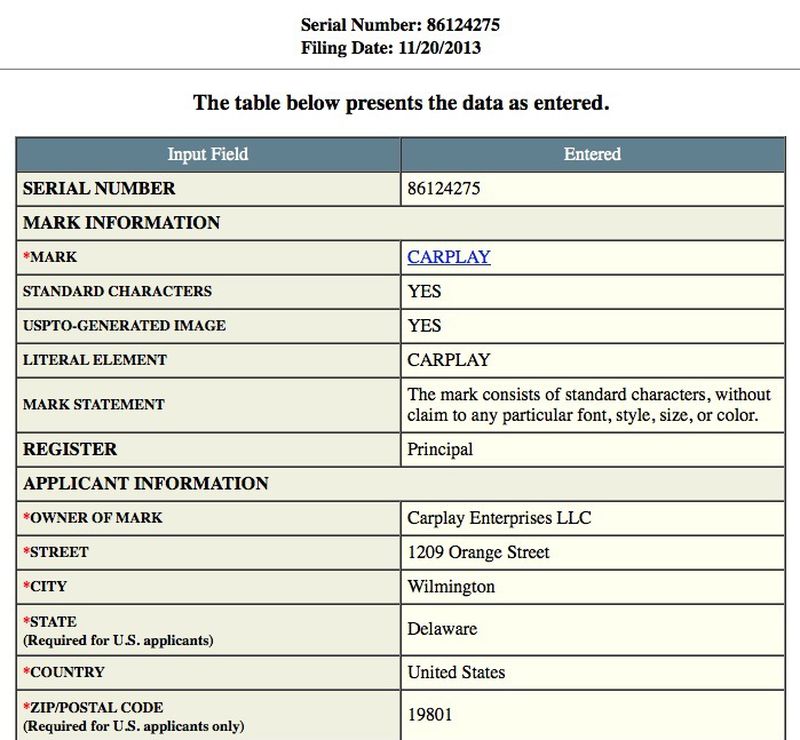 Apple's apparent efforts to protect the CarPlay name extend back even further, however, as the November trademark applications all cite a May 20, 2013 application in Trinidad & Tobago as priority. Apple commonly uses Caribbean countries such as Trinidad & Tobago and Jamaica to establish trademark priority, taking advantage of filing systems that receive little attention and are difficult to search.

Apple introduced "iOS in the Car" at its Worldwide Developers Conference in early June, but it remains unclear whether that name was simply a placeholder with Apple intending all along to launch the feature as "CarPlay" once relevant trademark applications had been made throughout the world. Alternatively, Apple may have been considering several possibilities for the name and filed the application in Trinidad & Tobago to preserve that option before moving forward with the CarPlay name late in the year.

Rizzm
Sounds like something you do with your girlfriend in the backseat.
Rating: 5 Votes

Somebody has been watching too much "House of Cards." This isn't one of those once-in-a-lifetime stories that every investigative journalist dreams about. I think we can dial down the sensationalism a little bit.

And it's just a blog story for a reason...an interesting little tidbit, nothing more.
Rating: 3 Votes

I guess it's SOP to do this for a big corporation with a big trademark. But what is the advantage? Suppose the world learned in November that "iOS in the Car" was to be branded "CarPlay"? What is the advantage in going to such lengths to hide it?


My guess is that because of all the countries and long process required to register there is a risk that if someone found out they could get ahead of apple and then register the name on their own. Later sue for money. In my imagination this is the same as domain squatting and can cost companies time and money to get it resolved. Therefore by doing this covertly, they avoid the issue and when they come out publicly, it is too late for the trolls and squatters to try and take advantage.

That is my conspiracy theory and I'm sticking to it. :D
Rating: 2 Votes

mrgraff
Wow. Talk about needlessly taking things seriously. I was only making a joke about the level of detail and careful research in the story. I certainly wasn't suggesting that everyone watches the same TV shows.
Rating: 2 Votes

And it's just a blog story for a reason...an interesting little tidbit, nothing more.


Same here. TV viewing isn't universal, and macrumors is a rumor site about apple. Cannot be taken more serious than this.
Rating: 1 Votes

mrgraff
Somebody has been watching too much "House of Cards." This isn't one of those once-in-a-lifetime stories that every investigative journalist dreams about. I think we can dial down the sensationalism a little bit.
Rating: 1 Votes
[ Read All Comments ]