More importantly, the software is now much easier to install, requiring neither a jailbroken device nor a work around to set the device clock to 2012. Prior to the 2.0 update, installing GBA4iOS without jailbreaking required an iPhone's date to be set to 2012. Though it doesn't require an initial date change, GBA4iOS 2.0 does carry a warning that the device clock may need to be set back to 2/19/14 if the app fails to open. 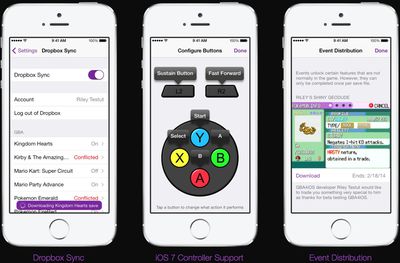 With GBA4iOS 2.0, gamers can play Game Boy Advanced, Game Boy Color, and original Gameboy ROMs directly on their iPads and iPhones, but the software is only compatible with devices running iOS 7. GBA4iOS 2.0 is distributed using an Apple Enterprise certificate, which are designed to allow companies to distribute iOS apps internally.

Downloading games for GBA4iOS previously required navigating outside of the app to find ROMs, but the newest version includes an in-app web browser that can be used to download games from any ROM website. GBA4iOS 2.0 also includes full support for cheats, accepting five different code formats covering everything from Game Genie to Action Replay.

While several emulators have snuck into the App Store via shell apps, they are always short-lived as Apple pulls the apps within hours or days of release. GBA4iOS is able to overcome Apple's restrictions as it is not installed via the App Store. Instead, GBA4iOS can be installed directly on an iOS device from the website, by tapping the download link on an iPad or iPhone.

Update: Apple has revoked the enterprise certificate that GBA4iOS used to install itself on iOS devices, which means installs now require setting a device date back to February 18, 2014 before downloading the software. After installation, the date on the device can be changed back to the present time.

Warez/Serials/Keys. Do not post software serial numbers or keys or refer people to specific websites, software, or techniques whose purpose is to break or bypass software licensing methods, distribute cracks, or obtain or use commercial software or media in violation of its license and/or for copyright violation. Do not ask for or give such help.


Why would this be posted in direct violation of forum rules?
Score: 16 Votes (Like | Disagree)

daijholt
I'm curious, how exactly does this get installed from the browser? Wouldn't that be a serious security issue?
Score: 9 Votes (Like | Disagree)

I downloaded it via the link in this article and successfully installed it. But everytime I try to open the app, it crashes immediately. I have an iPhone 5S running 7.0.4 (11B554a).


Doesn't work for me either. Won't even launch, it's stuck in a "installing" cycle over and over.
Score: 7 Votes (Like | Disagree)

keysofanxiety
MacRumours, thank you SO MUCH! Downloaded this as soon as I got the notification (cheers Mavericks!) and I'm playing FireRed as I speak.

EDIT: This is seriously ****ing sweet. Seriously, this works a charm and it's so easy to set up. Literally four taps and I'm playing this stuff. Just remember to be patient with the web browser, it does take a little time to load. :)
Score: 7 Votes (Like | Disagree)

I have to agree, but since Nintendo doesn't offer their games on the App store where I can purchase them. I am left with other methods to play legacy games.


:D I think that falls under first world problems. Doesn't quite compare to the old "I need to feed my family" excuse.
Score: 5 Votes (Like | Disagree)

Sunday September 25, 2022 6:50 am PDT by Sami Fathi
Apple may decide to release its remaining products for 2022, which include updated iPad Pro, Mac mini, and 14-inch and 16-inch MacBook Pro models, through press releases on its website rather than a digital event, according to Bloomberg's Mark Gurman. In his latest Power On newsletter, Gurman said that Apple is currently "likely to release its remaining 2022 products via press releases,...
Read Full Article • 135 comments