TouchArcade has spotted the appearance of a free MAME game emulator on the App Store called iMAME. MAME is a popular arcade machine emulator that will run thousands of arcade games if you have the original ROMs. 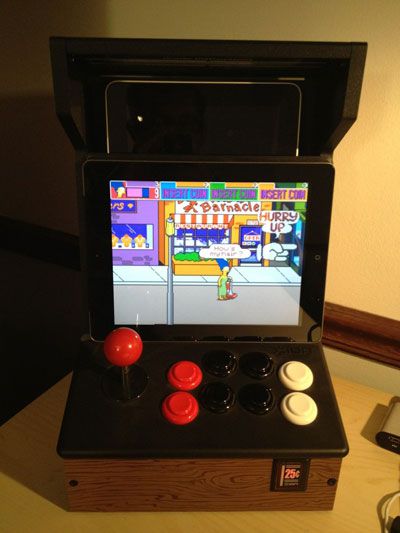 iMAME running Simpsons with iCade support.
iMAME ships with nine "less than stellar" ROMs to play, but apparently can load arbitrary ROMs using a 3rd party utility such as iExplorer without jailbreaking:

It seems that the same method used to get games into iDOS also works in iMAME. Twitter user @mattlukens mentions, "Yep, add a .zip rom to the Docs folder through PhoneView and it works perfect! Just tried Crime Fighters!" He also provided a screenshot. The clock is really ticking now on Apple pulling this down

Apple has had a bit of a spotty history with emulators on the App Store. While a number of individual emulators do exist on the App Store, Apple has been more restrictive about these open emulators, presumably due to potential legal issues. For example, a full DOS/Windows 3.0 emulator appeared in the App Store at one point but was quickly pulled by Apple.

iMAME is currently available as a free Universal application on the App Store. [Link]

Update: It took Apple two days to get around to it with the holidays, but iMAME has been removed from the App Store.

Switz213
Downloaded and saved forever (at least until iOS 6)
Score: 16 Votes (Like | Disagree)

wordoflife
Don't think I'll ever use this, but downloaded it just in case.
Score: 11 Votes (Like | Disagree)

Don't think I'll ever use this, but downloaded it just in case.

Easiest way is to open "www.macrumors.com" in your iPod Touch's web browser, then click on the "Link" at the end of the article.

I just love how arn is helping out with the deviant behavior. :D
Score: 7 Votes (Like | Disagree)

It's not breaking any of the app store rules. There are many emulators up on the app store. The only app store requirement is that you can only play games bundled with your app. It doesn't cover users jail breaking the phone and loading more.


I guess your reading comprehension isn't so great because in the OP it says you can load more on it with-OUT Jb'ing...
Score: 6 Votes (Like | Disagree)

How do I download it? iMame emu isn't in the app store?