doubleTwist, the company behind the popular multi-platform iTunes-compatible doubleTwist Media Player, today brought its new AirPlay Recorder app to the Mac, allowing iTunes users to capture and save streaming audio for offline use.

First introduced for Android in January, AirPlay Recorder is designed to record audio, such as streaming songs from iTunes Radio, using AirPlay. After downloading and installing the app, it will appear as an AirPlay device within iTunes and will record audio after being selected from the AirPlay device list. 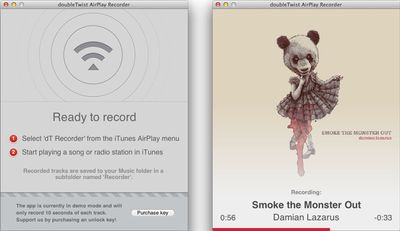 The app will record any audio or radio stream played within iTunes to a "Recorder" folder within the Music folder for offline playback. Recording audio is done in real time, which means a four minute song will take four minutes to record, and a reliable Internet connection is necessary because the app checks recording quality.

Apps like AirPlay Recorder, such as Audio Hijack Pro have been previously available, but at a higher price. The legality of AirPlay Recorder and similar apps is unclear, but according to doubleTwist co-founder Monique Farantzos, who spoke to Engadget back in January, the company is unconcerned about the app's legal status.

"Recording has been around for decades, from audio cassettes (remember mix tapes?) to TuneIn radio's recording feature. Given that Apple built their iPod empire on letting millions of people rip CDs based on fair use, we don't see how they could object to this app."

Along with Farantzos, doubleTwist also boasts Jon Lech Johansen as a co-founder, one of the developers behind DeCSS, a computer program able to decrypt content on commercially produced DVDs. Johansen was prosecuted in Norway back in 2002 for developing the software, but was later acquitted.

doubleTwist's AirPlay Recorder for Mac can be downloaded for free from the doubleTwist website. The free version allows users to record 10 second samples while full recording capability can be unlocked for $9.99.

Of course I'm speaking on deaf ears, but.. if we pirate less, companies will be less willing to restrict how we use the stuff we buy. How'bout pirating less? Please? :)

(I'd be lying if I said I didn't pirate things occasionally, but only things that are otherwise unavailable legally)
Score: 18 Votes (Like | Disagree)

newagemac
See this is why we can't have nice things.
Score: 10 Votes (Like | Disagree)

Audio Hijack Pro has been able to do this for years now.
Score: 8 Votes (Like | Disagree)

Can't the same thing easily be accomplished (for free) with Soundflower (http://cycling74.com/products/soundflower/) and Quicktime?
Score: 8 Votes (Like | Disagree)

Of course I'm speaking on deaf ears, but.. if we pirate less, companies will be less willing to restrict how we use the stuff we buy. How'bout pirating less? Please? :)

(I'd be lying if I said I didn't pirate things occasionally, but only things that are otherwise unavailable legally)

This application is pointless. Why degrade music with lossy-to-lossy transcoding when you could just pirate it proper?
Score: 8 Votes (Like | Disagree)

thespazz
LOL @ people saying "before its pulled". Who is going to pull it from the double twist website? Apple?
Score: 5 Votes (Like | Disagree)
Read All Comments