Tuesday February 4, 2014 9:56 am PST by Jordan Golson
ComScore today released the results of its monthly rolling survey of U.S. mobile phone users for the October-December 2013 period, showing that Apple's U.S. smartphone market share has increased 1.2 percentage points since September, for a total share of 41.8 percent. Though Apple's share continues to grow, it still lags behind Android's total share of 51.5 percent, down 0.3 percent since September.

Looking at handset manufacturers, Apple and Samsung continue to dominate the category, growing their control of the market by 1.2 percent each over the three month period. Motorola, LG and HTC round out the top five, with all of them seeing flat or negative growth.

In Apple's earnings call last month, CEO Tim Cook warned that U.S. iPhone sales were weaker than expected because of U.S. carriers changing their upgrade policies. As a result, seeing share growth despite the headwinds is a positive sign for the company.

156 million people in the U.S. owned smartphones (65.2 percent mobile market penetration) during the three months ending in December, up 3.2 percent since September. Apple ranked as the top OEM with 41.8 percent of U.S. smartphone subscribers (up 1.2 percentage points from September). Samsung ranked second with 26.1 percent market share (up 1.2 percentage points), followed by Motorola with 6.7 percent, LG with 6.6 percent and HTC with 5.7 percent.

Apple grew its smartphone market share by 0.6 percent from November, largely at the expense of Android and BlackBerry. Despite a significant marketing effort, Micrsoft's Windows Mobile has failed to gain any traction over the past three months, dropping 0.2 percent from 3.3% to 3.1% of total platform share.

ComScore's data tracks installed user base rather than new handset sales, which means it is more reflective of real-world usage but slower to respond to shifting market trends than some other studies. 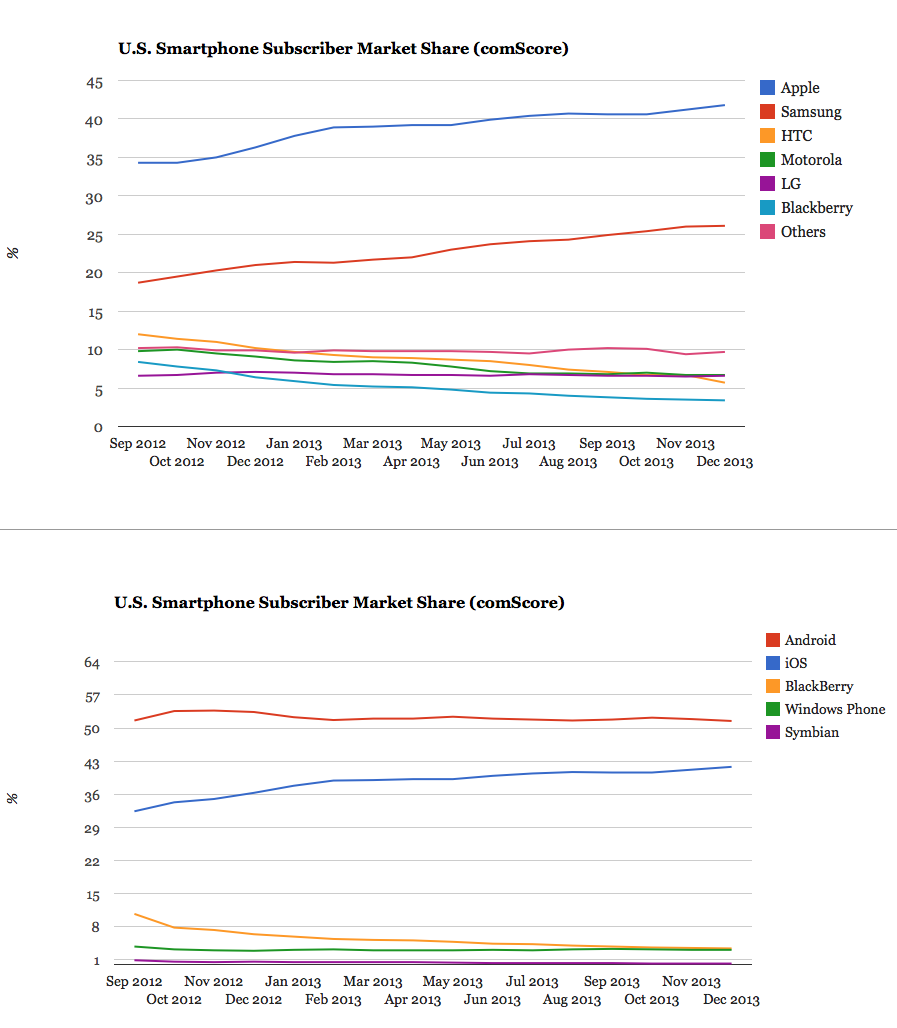 This falls in line with the recent report from Counterpoint Technology Market that Apple is continually increasing its share of premium (>$400) phones, considering mostly premium phones are sold in the US thanks to the carrier contracts and subsidies.

Apple reportedly increased its share from 35% to 65% in just one year, and that graph doesn't even fully represent it yet. In the mean time, Samsung dropped from 40% to 21%. That's bad for them because their expensive phones (Galaxy S and Note series) were the ones generating profits.
Rating: 4 Votes


Note that this is about total current users, not sales.

So it includes all users of both new and old models, from any maker.

When the source is marked as being from MobiLens, it means it comes from comScore's own collection of 30,000+ long term volunteers who are supposed to be a representative group of users. They constantly report on what devices they use or stop using, how they use them, and so forth.

ComScore follows these same people for years and years, instead of surveying a small random group each time.

This is why these stats change more slowly than other brief snapshots of sales or browser stats. This data reflects a real life, fairly static group of people who have to deal with two year contracts, upgrade eligibility, family financials, and so forth.