Jonathan Zufi, author of the coffee table book "Iconic: A Photographic Tribute to Apple Innovation" and the man behind the Shrine of Apple site, has created a new website that includes photos of Macintosh computers and portables from Apple's early years. 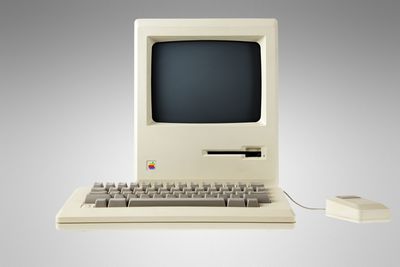 To celebrate Mac's 30th birthday, I've created this micro site for all the world to enjoy. In 2009, I started taking photos of every Apple product ever made since 1976. Then I turned them into a really big photo site. I hope you enjoy this trip down memory lane, and I hope that the Macintosh's anniversary brings your happy memories of your own experience with Apple.

There's also a section on the Macintosh II and LC, Apple's lower-end consumer computers introduced in the late 1980s and 1990s, and a section entitled "Other Awesome Macs" that shows off products like the 1993 Macintosh TV, the 1992 Macintosh Quadra 950, and the "Flower Power" iMac G3 from 2001.

Each photo is accompanied by a detailed description of product taken from Wikipedia, giving website visitors a quick history of the iconic computers that gave Apple its start. The full site, which has more than 35 photos and product descriptions, is well worth visiting.

January 24, 2014 marks the 30th anniversary of the initial unveiling of the Macintosh. In celebration of the event, Apple executives Phil Schiller, Craig Federighi, and Bud Tribble interviewed with MacWorld to discuss the Mac and Apple CEO Tim Cook has plans to speak with ABC news about the anniversary tomorrow night.

Some of the original Macintosh development team, including Daniel Kottke and Mike Markkula, will hold an event with the Computer History Museum on January 25 to celebrate the anniversary as well. That event will take place at the Flint Center in Cupertino, California, where Steve Jobs originally introduced the Mac.

Doctor Q
The photo of a Flower Power iMac brings back fond memories of my days in the hippie commune.

Actually, I borrowed the iMac and collected the costume and decorations specifically to pose for this photo. Groovy!
Score: 1 Votes (Like | Disagree)

al256
I truly wish there was a special order program at Apple to buy a new Mac that uses these old, beautiful designs. I'd even take it if all they offered was a base model 11" MBA for the hardware side.

I miss my old Pismo the most, of all the Macs I've owned.

"All these years, all these memories, there was you. You pull me through time."

ironsienna
Out of all the colours of iMac G3 they chose the flower power one, the most hideously tacky????

Is it because the f*^* up colour matches the new UI trend? Oh lord I can only imagine how the new version of iMac will look like...

They could make by the way a red version of those and sell them for 1,000,000
Score: 1 Votes (Like | Disagree)
Read All Comments

Saturday December 3, 2022 10:23 am PST by Joe Rossignol
iPhone 12 Pro and Pro Max, iPhone 13 Pro and Pro Max, and iPhone 14 Pro and Pro Max models feature a LiDAR Scanner next to the rear camera that can be used to measure a person's height instantly in Apple's preinstalled Measure app. To measure a person's height, simply open the Measure app, point your iPhone at the person you want to measure, and make sure they are visible on the screen from...
Read Full Article • 127 comments

Friday December 2, 2022 10:54 am PST by Juli Clover
Google is continuing on with its attempt to convince Apple to adopt the RCS messaging standard, publishing a new "it's time for RCS" blog post. Promoted heavily by Google, RCS or Rich Communication Services is a messaging standard that is designed to replace the current SMS messaging standard. It provides support for higher resolution photos and videos, audio messages, and bigger file sizes, ...
Read Full Article • 541 comments