Following the release of the Mac Pro, a quick teardown by Other World Computing (OWC) revealed that the tower's Intel Xeon E5 processor was socketed and removable, theoretically allowing for future upgrades. All CPUs in the Mac Pro were found to use the same LGA 2011 socket standardized on the Mac Pro's motherboard. 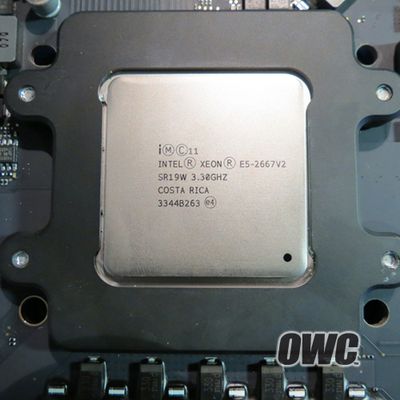 With a replaceable CPU, customers can purchase more affordable lower-configuration Mac Pros that can be updated in the future as processor prices drop. Prices for multi-core processors today remain high, with the CPU OWC used from Intel priced at $2000. Apple's own CPU upgrade options range in price from $500 to $3500. Based on the 3.7Ghz quad-core Intel Xeon E5 with 10MB of L3 cache, pricing from Apple is as follows:

The upgradeable CPU in the Mac Pro is a deviation from standard practice for Apple, with most consumer-oriented Macs featuring soldered processors. Along with a removable CPU, Mac Pro buyers are also able to upgrade memory and other components. In a recent teardown, iFixit gave the Mac Pro a repairability score of 8 out of 10, highlighting the easily accessible internal components and the non-proprietary screws.

Apple's Mac Pro is currently available exclusively through the online Apple Store. Due to low supply and high demand, new orders are not expected to ship until February or later, but customers who placed orders shortly after the computer went on sale have begun receiving units.

Lesser Evets
That ruins some doubters' rainy day parades. That new Pro isn't bad, from the reports coming out.
Score: 22 Votes (Like | Disagree)

That ruins some doubters' rainy day parades. That new Pro isn't bad, from the reports coming out.

Don't worry, the whiners will move on to their next perceived issue or just go back to the garbage about lack of internal storage.
Score: 10 Votes (Like | Disagree)

Too bad you can't order the new Mac Pro without any CPUs in it. The problem with ordering a lower model and then upgrading to a higher CPU model is that you're still stuck with the original CPU. I suppose you can try to sell it, but you're not going to get what you paid for it (relative to the cost of the machine) back. Unfortunately, Apple won't sell bare-bones machines and let users upgrade it themselves because they make all their BILLIONS by bending the customer over and shoving the parts in themselves at 200-600% markup. :eek:


Same as it is for any pre-configured OEM machine.
Score: 9 Votes (Like | Disagree)

sransari
NOWWW we're talkin...I understand that maybe Apple doesn't want to advertise after-market upgrades, but these types of simple, inexpensive, and effective upgrades is what makes Pro towers so valuable and desirable.
Score: 9 Votes (Like | Disagree)

The upgradeable CPU in the Mac Pro is a deviation from standard practice for Apple, with most consumer-oriented Macs featuring soldered processors.

Although I agree that most consumer-oriented Macs have featured soldered processors for some time, the Pro line has employed socketed processors exclusively as a matter of course as far back as I can recall. Certainly as far back as the G3 PowerMacs and most likely even before that.
Score: 8 Votes (Like | Disagree)

You live in hope but don't forget that an upgradable CPU doesn't equal drive bays or PCIe slots.

To those people I would quote the Rolling Stones