With the first new Mac Pro units having made their way to reviewers and even some early online orders arriving in the closing days of 2013, more details on the new machines are continuing to surface.

Other World Computing (OWC) has performed a quick teardown on one of the new machines, and while documentation currently consists of only a small set of photos, the company has confirmed that the Intel Xeon E5 processor found in the Mac Pro is indeed removable, allowing for future upgrades. All four available CPUs for the new Mac Pro use the same LGA 2011 socket standardized on the Mac Pro's motherboard. 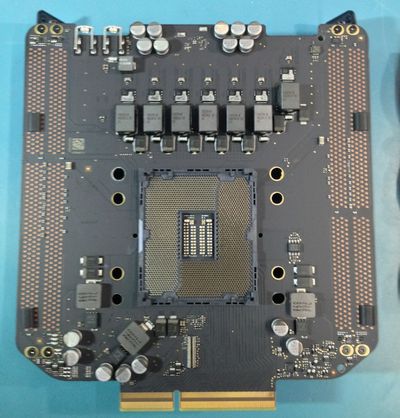 The main processor is one of the most significant variables in the cost of the new Mac Pro, with the four available CPU options spanning $3500 in upgrade charges. Pricing relative to the stock 3.7GHz quad-core Intel Xeon E5 with 10MB of L3 cache is as follows:

Using a removable socketed processor rather than the soldered processors found in most of Apple's Macs means that users may be able to upgrade their machines in the future as their needs change and/or chip prices decline.

Earlier this week, OWC also shared a photo showing the new Mac Pro driving a total of six 27-inch displays, each with a horizontal resolution of at least 2500 pixels. The new Mac Pro offers six Thunderbolt 2 ports for connectivity, allowing for a number of combinations of displays and other peripherals.

I'm sure people will be happy to hear this... Apple seems to be keeping the professionals in mind as far as upgradability goes..


pro workstations are not purchased w/ CPU updatability in mind, i assure you. we buy workstations, we use them for a number of years, and then we retire them. we are not sitting here dorking around w/ DIY CPU upgrades...thats an activity for enthusiasts.
Score: 26 Votes (Like | Disagree)

macuser1232
So CPU is removable/upgradable, RAM is upgradable, SSDs are upgradable, and GPUs have the possibility of being upgradable. What was that about the Mac Pro being useless because it can't be upgraded and thus will quickly be obsolete?
Score: 18 Votes (Like | Disagree)

proline
To the haters who jumped to the conclusion that the CPUs would not be upgradeable, feel free to post your apologies here. A little claim chowder is good for the soul.
Score: 16 Votes (Like | Disagree)

fixmymac
The Service Manual confirms that the CPU can, and will be, replaced separately should an issue arise. The process has 13 steps and ends with running a Cooling System Diagnostic A list of new special tools is given in the manual for doing so. The list includes;

Djreversal
I'm sure people will be happy to hear this... Apple seems to be keeping the professionals in mind as far as upgradability goes.. They aren't locking in the unit to just once specific ordered platform and thats it... i know people are upset without the PCI upgradability but, i think the external thunderbolt connectivity will eventually pan out to be something people really like.

I would probably think the video cards will be an area that maybe nvidia will shoot to develop something for.. I am a big nvidia fan, although apple seems to be going to work on the Firepro drivers and it seems to be laying out some impressive results.
Score: 14 Votes (Like | Disagree)

What's so obsolete about SATA?

What is not? It is a connector that was designed with HDDs in mind and every new version was made to keep backward compatibility. So much that SSDs have adopted the size of 2.5-inch notebook HDD drive bays. The current SATA standard SerialATA 6.0 Gbit/s is already maxed out by todays SSDs. Why wait till it catches up? Apple knows that they never again want to use spinning disks and older SSDs. Fusion Drive exists only as a transition technology to keep storage prices down in stationary Mac minis and iMacs. Customers of the Mac Pro need fast storage, not cheap storage. All these computing cores need to be fed fast with new data. Even a SATA III SSD does not fit in this setup. It is already obsolete for Pro computing.

And especially PCIe, which they have also removed but which every GPU except for their snotty little proprietary cards use. Not to mention all those sound cards and stuff.

All those old sound cards made for the expansion of pre-thunderbolt computers. Who knows if all those stuff isn't better emulated in software? Or build right in that external sound station you want to connect to your computer? Does it belong inside the machine? I don't know. Maybe not. 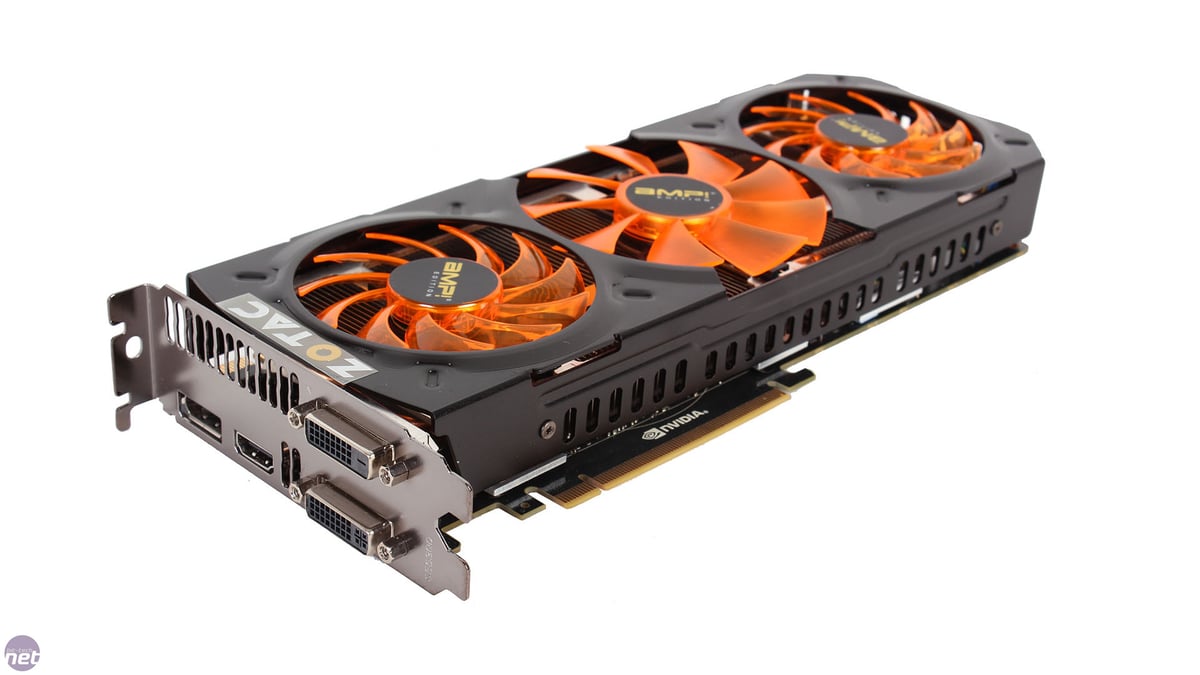 Look how stupid these standard PCIe cards look. Instead of changing the physical dimensions of a standard card slot, they take up two of the old slots. Because there is no sufficient thermal design, this one card alone has three times the number of fans as the whole Mac Pro with dual GPUs in it. Ridiculous! Totally outdated DVI and HDMI ports, though they had the courage to leave out VGA. But where do I connect the six 27-inch thunderbolt displays in the photo above?

Anyone saying that this new Mac Pro is very user-upgradeable is kidding himself. It's meant to be sleek and use external components.

Everyone saying that the compliance with ancient standards is a way to enable upgradeability is kidding himself. What those IBM-compatible PCs do, is to enable user-downgradebility. And yes, being smaller, lighter and looking sleeker as previous computers is a form of progress. You want to go further that route until the power of a Mac Pro fits on your ring finger.
Score: 13 Votes (Like | Disagree)
Read All Comments