This year's lucky bags, which sell for 36,000 yen, or $345, come in four different configurations with certain items appearing in every bag, including a t-shirt commemorating the event, an Incase City Collection Compact Backpack in a special red color, and a Mophie Juice Pack PowerStation Mini with a design to match the grab bag. 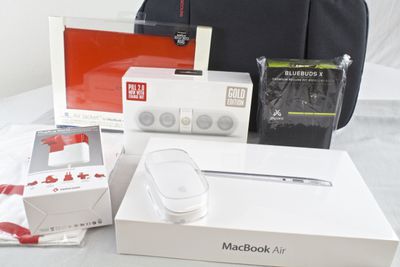 Different items between the bundles however differ greatly, with one configuration of the bag offering a 11-inch MacBook Air with a Power Support Air Jacket, an Apple Magic Mouse, and a Beats by Dre Pill Bluetooth speaker, and another variant of the bag offering a Wi-Fi only iPad Air with Smart Cover, Nike+ FuelBand SE, Phillips Hue Starter Kit, and Square Reader.

The other two versions of the lucky bags are highlighted by the inclusion of either a non-Retina iPad Mini or 7th generation iPod nano, with items such as the Jaybirds BlueBuds X Bluetooth headphones, the IZON View remote camera, and a Logicool (known as Logitech in the U.S.) Ultimate Ears Mobile Boombox as well.

Apple's grab bags are sold as is, and returns are not accepted unless a product is found to be defective. Still, the bags have been quick sellers on previous occasions, with many people lining up the night before to get their hands on a bag.
As with past years, Apple's Lucky Bag promotion is limited to customers of Apple retail locations in Japan, though other countries, like China, may see the same traditional Apple Store sales during the new year.
[ 107 comments ]

But doesn't it push sales?

There can be a huge amount of legal and other problems, depending where you are.

One: Obviously the store won't accept returns if you don't like the contents, just like you can't return a lottery ticket that didn't win. Not accepting returns might be illegal in some country.

Two: Not telling you exactly what you get in a sale might be illegal in some country.

Three: In some country, this might be considered to be a lottery, and a store would need a license to run a lottery which might be hard to get, or a lottery might be illegal.

Four: Depending on the attitude of customers, people who got less than they expected might get angry and cause the store more trouble than this is worth. Obviously culture dependent.

Fifth: Depending on the attitude of customers, they might deeply distrust an offer like this and expect to be ripped off, so very few would buy and many would think that the store attempted to rip them off, which is not good for business. Obviously culture dependent.

As with past years, Apple's Lucky Bag promotion is limited to Japanese customers, ...


I suppose it is not limited to Japanese customers, but to customers who go to an Apple Store in Japan, right? Japanese customers turning up in a store in New York won't get a "Lucky Bag", and I won't be refused one in Tokyo because I'm not Japanese?
Score: 24 Votes (Like | Disagree)

Four: Depending on the attitude of customers, people who got less than they expected might get angry and cause the store more trouble than this is worth. Obviously culture dependent.


Exactly why the US will never see this.
Score: 23 Votes (Like | Disagree)

totally a waste of money. the chance of getting a mac air is probably 1 in 10 or 20.

why would anyone spend $345 on belkin case.

are you kidding me? none of the bags are worth it unless you get mac air

Jessica Lares
The US got the 12 days of apps this year and look what happened. :rolleyes: The App Store is a total mess and most are whining because they think they're entitled to more than they're being offered.

We're not culturally stable enough in the US to have something like this. Everyone has $345 to blow, especially when it mean they're getting $1,000+ worth of stuff. Look at what happens on Black Friday.
Score: 14 Votes (Like | Disagree)

Why isn't this popular in other countries?


Probably the same reason Boxing day isn't a big deal in many countries - its a regional/cultural thing
Score: 11 Votes (Like | Disagree)

marioguarneros
Those bags are not bad at all!

-Why is this not happening in my country?
-This bags are rubbish.
-I already have a MacBook Air, iPad, etc.
-They are too expensive!

Blah, blah, blah you get the idea from all the other posts in the forum.

Congrats to whoever did actually buy their surprise bags! =)
Score: 7 Votes (Like | Disagree)
Read All Comments