Apple today announced its annual Lunar New Year sale, a one day event for Asian countries that is also known as "Red Friday" because of its similarity to November's Black Friday sales.

As with its Black Friday event, Apple will be offering limited time deals on Macs, iPads, iPods, and accessories like the Smart Cover. 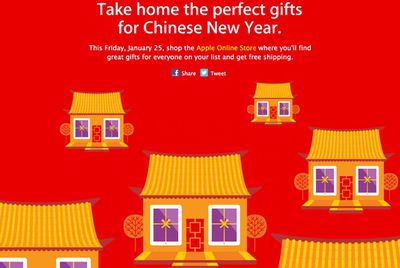 Last year's sales saw discounts of up to 8% on iPads, 10% on iPod touches, and a flat discount of HK$ 770 on all models of the MacBook Air, the MacBook Pro, and the iMac. This year’s discounts are expected to be similar, and free shipping will be offered.

Apple has also published a gift guide for the event, which features its flagship products like the iPad mini and the iPhone, alongside several third-party accessories from manufacturers like Bose, Logitech, and Griffin.

The Red Friday sale will take place on January 25 and is valid in China, Hong Kong, Malaysia, Singapore, South Korea, Taiwan, and Thailand.

Can I get the deals in the US?

Well, even "Asian Countries" would still be incorrect, because it only applies to countries that care about the Chinese New Year. Last year, 6 countries (China, Taiwan, Hong Kong, Thailand, Singapore and the Philippines) out of the 52 Asian countries were included in the promotion.

So that means people from Israel, Afghanistan, eastern Russia and Japan are just as out of luck as the many Asian customers in non-Asian countries. :rolleyes:
Score: 3 Votes (Like | Disagree)

unplugme71
Both the image and title are misleading being out of context.

The article title says Asian customers, not limiting to Asian countries. So any US citizen that's Asian could in fact get this discount.

The image, while saying Chinese New Year, does not limit where the items can be bought as it's not shown with a screen shot from the Chinese Apple Store, nor does the image limit the deals to Asian countries.

The Philippines (store.apple.com/ph) is not included this year :-(

Thanks for the URL bro.
Score: 1 Votes (Like | Disagree)