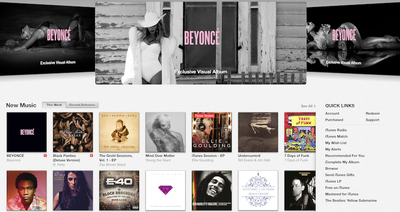 The album, dubbed a "visual album" because each song comes with an accompanying music video, has seen an unprecedented marketing push from Apple within the iTunes Store, receiving all the attention of the promotion carousel at the top of the store and even spawning a "Beyoncè albums" section where users can see her four other albums and anthology album.

Beyoncè is available now for $15.99, with individual song and video sales starting on December 20.

not gonna lie, its refreshing to have an album simply come out without all this countdown and preview clip bs on social media. feels like 2003 again
Score: 5 Votes (Like | Disagree)

Of course she's going to take all of the advertising spaces. She's B.E.Y.O.N.CE. All you haters need to sit down.


We aren't haters. Beyonce should be better than that.
Score: 5 Votes (Like | Disagree)

Brandon263
Of course she's going to take all of the advertising spaces. She's B.E.Y.O.N.CE. All you haters need to sit down.

I'm going to get flak for this (probably mainly because it's Beyoncé and it's hard to find anyone that hates her) but I'm on the side of "this is stupid."

I have nothing against her, or her music, but dominating the big advertising spots is stupid. There are other albums coming out that could really benefit from those spots (such as Childish Gambino's new album that released a few days ago) whereas Beyoncé is so well established to the point that all you need to say is "Beyoncé has a new album available now" and the rest will take care of itself.

It would make sense to have her take up one of those spots as with all major releases, but to steal away ALL of the largest advertising spaces is nothing but bad business for the rest of everyone.

v0lume4
I hate to see the big record companies make sure they push absolutely everything else from the spotlight for a few days, like they're doing here.

Then again, of course the "popular" music is always what's on the front page. The real gems are the music that are not.. that.
Score: 5 Votes (Like | Disagree)
Read All Comments

Tuesday January 19, 2021 8:25 am PST by Hartley Charlton
It is possible to remove the headband of AirPods Max with just a standard SIM card ejector tool, hinting at the possibility of interchanging headbands to achieve a different colorway. Image via Prelook In December, MacRumors revealed the large variety of AirPods Max ear cushion color combinations when it became clear that they were magnetically attatched and available for sale separately....
Read Full Article • 63 comments

Wednesday January 20, 2021 8:12 am PST by Hartley Charlton
Apple has reportedly cut production of the iPhone 12 mini by two million units to create more manufacturing capacity for the iPhone 12 Pro, according to a new Morgan Stanley investment note seen by PED30. Apple is believed to have made the switch for the first quarter of 2021 in an effort to combat continuing lead times for the more popular iPhone 12 Pro. iPhone 12 Pro lead times remain ...
Read Full Article • 183 comments