Apple has recently expanded iTunes Match availability to several Nordic countries, according to both reports on Twitter and tip from a MacRumors reader.

iTunes users in Finland, Denmark, Norway, and Sweden now have access to the service, which has a yearly price of 249 kr in Denmark, Sweden, and Norway and €24.99 in Finland. In comparison, iTunes Match is $24.99 in the United States and £21.99 in the U.K. 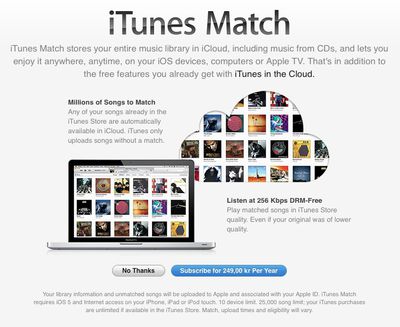 First introduced in late 2011, iTunes Match allows iTunes users to match their existing iTunes libraries with high quality versions of songs from Apple's iCloud. After matching, content is available in iCloud and can be accessed from any device.

Finland, Denmark, Norway, and Sweden have also gained access to purchased music in iTunes in the Cloud, allowing previously acquired music to be downloaded on all devices.

Update: Apple has also expanded iTunes in the Cloud support in Bulgaria and Portugal to include movies.

Apple charges you $25 to listen to your own music. I'm sure this service makes sense for some, but not for me.

- When I'm at home, I see no need for this. I have my music on MBP, and I can access all that via AppleTV
- I only put the most important songs on my iPhone. No need to carry around thousands of songs when you only listen to a fraction.
- I use Google's free music service. I uploaded my entire iTunes library ~14,000 songs and can access each and every song via a $1.99 app on my iPhone.


This is the very reason that I use Match. I keep the physical bits on one machine at home. I rip them all in lossless format because I have a sound system capable of reproducing that quality.

I have three other computers signed on to Match. None of them have any media on them, but can stream all of my iTunes library. One is a work iMac the other two are MacBooks.

My iPhone and iPad can also stream the entire library (as long as I have wifi or cellular access) without having to store them.

I just wish there was a way to say when goes into the cloud for iTunes match and what doesn't.

Why not just a flag that says 'Include in the Cloud?' or even have the checkboxes we already have control that? Sad.

Or heck charge me another $24.99 a year and let me have double the number of tracks in the Cloud. It's a great service, but still just short of how good it could be.


I agree completely. The sync-all, 25k hard limit has kept me from using the service (I have just over 30k songs). Options that could work (in order of preference):

1) Let us sync >25k songs. Amazon doesn't have the same limit, so I'm guessing that it's part of the record labels' contracts with Apple.

2) Let us choose what to sync without swapping libraries, the audiobook trick, etc.

bkar89
They might be abit late to the game. Spotify has a firm grip on the music market here. I pretty much stopped using itunes when spotify launched.

I only fire up iTunes if i need songs on my iPod, which is completley offline and cant stream through Spotify, or iCloud for that matter...

I dont really get why I need this service. Would be a godsend before Spotify, but after, meh...
Score: 3 Votes (Like | Disagree)

Nunyabinez
I have no where else to vent so, pardon my rant.

While on the whole I love match, the inconsistency of what matches and what doesn't makes me crazy. I have a number of albums that matched everything but one song. And they are not obscure albums, but major releases. And these are not torrented, they are ripped from physical media.

In fact, they have pushed me a few times to go to torrents to try find a version that matches. It pisses me off. Seriously. /rant
Score: 3 Votes (Like | Disagree)

xmaseve
Hopefully it works better for users in those countries than it does here in The USA! iTunes match never seems to work properly...there's always some issue along with the need to sign out / sign in again to get it temporarily working.
Score: 3 Votes (Like | Disagree)

I just wish there was a way to say when goes into the cloud for iTunes match and what doesn't.

Currently I have over the max number of tracks allowed so I have to have a large number of my tracks listed as AudioBooks (so they don't sync but they are still available to playlists, shared libraries, etc.). You can take an AudioBook to Music thus making it eligible for the cloud, but you can't take something once classified as Music and turn it to AudioBook to take it out of the cloud -- you have to save it locally, delete it from the library, let it delete from the cloud, reload it, and then quickly change it to an AudioBook.

Why not just a flag that says 'Include in the Cloud?' or even have the checkboxes we already have control that? Sad.

Or heck charge me another $24.99 a year and let me have double the number of tracks in the Cloud. It's a great service, but still just short of how good it could be.
Score: 3 Votes (Like | Disagree)
Read All Comments