Coming several weeks late, Apple has just now officially launched iTunes Match to customers in the United States. The iTunes Match launch is facilitated by the release of iTunes 10.5.1, which now allows users to subscribe to the $25/year service offering cloud-based matching and upload of users' complete iTunes libraries. iTunes 10.5.1 is available via the iTunes download page and should be rolling out to Software Update shortly.

Apple had apparently initially intended iTunes Match to launch by mid-October as part of iTunes 10.5 as seen in a number of developer betas, but the company removed the feature from iTunes 10.5 for the public release, giving it a few more weeks to complete work on the service. Even so, Apple missed its stated launch target of "end of October" and did not provide an updated timeframe for the iTunes Match debut once the target was missed, although the company continued testing with a new developer beta of iTunes 10.5.1 just this past weekend. 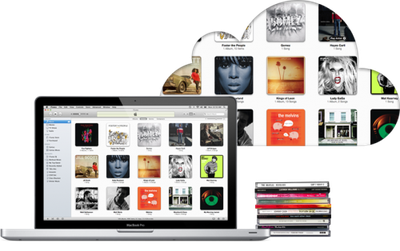 iTunes Match is a U.S.-only service for the time being, although the company is reportedly working hard to secure licensing to details to expand availability to other countries. iTunes Store users in a number of countries have been greeted with a "coming soon" tag on iTunes Match promo listings in their country-specific stores, suggesting that Apple is optimistic regarding expansion of the service in the relatively near future.

Update: Demand of iTunes Match subscriptions has overwhelmed Apple's systems, and the company has halted new signups for the time being.

Due to overwhelming demand, iTunes Match is not accepting new subscriptions at this time. Please check back in an hour.

Update 2: Despite Apple's notice about overwhelming demand still showing on the iTunes Match subscription page, subscriptions do now appear to be going through.

Nunyabinez
Posted this last night in a different thread, but it might help here too.

Been working with Match for a few weeks and thought I would post a FAQ type response here to what I see people asking over and over again.

1. When you enable Match it goes through a three step process. Analyzing your library, matching songs, uploading non-matched content. It does this for your whole library. You can't choose to exclude songs other than taking them out of your library.

2. If a song is matched, it becomes available to download in 256K AAC. If a song is not matched it is copied in its current format and bit rate up to 320K. If the file is Lossless however, it is converted (presumably by your computer) to a 256k AAC file and then uploaded.

3. Nothing happens to your local music when you run match. If you have a lower quality song that was matched you can remove it from your local library and then replace it with the 256k version. What happens is you delete the song, but the entry in iTunes stays, but a little cloud now shows up in a newly added column that shows you that you have a song that is in the cloud but not in your library. You can click on the cloud and it will download it to your local library, where again it is now permanently yours at the higher bit rate.

4. Match uses your meta-data. If you in an anal-retentive fashion have made lots of custom edits to your files, that is what gets copied to the cloud. Even if you replace your songs with the upgraded versions you keep your previous metal-data.

5. Your limit is 25,000 songs and purchased from iTunes don't count, but matched does. Again if you have personal recordings etc. they won't match (obviously) but will be copied to the cloud in their current format (see above for Lossless exception)

6. Songs below 100k (I couldn't tell if it was below 128K since I don't have any at 100k) are listed as ineligible and nothing happens with them.

7. iTunes runs match on any new material that is added. I.e. when you rip a new album it is matched or copied to the cloud depending on how the match worked. Also, when you change meta-data, it immediately moves that meta-data to the cloud. So, if you correct a name on your iMac, it fixes the name in match. However, if you already had it downloaded on your phone, it would not be changed. But if you delete if from your phone and download it again you would see the new information.

8. iTunes match is not an amnesty program. Because there is no way to prove that matched songs came from a legitimate source, you can't claim you "own" the songs simply because you have a matched version. The RIAA might still prove that your IP address downloaded a file and sue you. Also, since meta-data is preserved if there is a comment like "ripped by mega-thief" it's still going to be there, unless you clean it manually. This does reduce the likelihood that they could prove it was illegally obtained because it had say a specific bit-sum, but it was never a crime to be in possession of files if it couldn't be proven that you up or downloaded it. So, be aware, this does little to protect you from the RIAA.

9. You have reasonable control to get songs off the cloud that you don't want there, but if you keep it in any iTunes library that has match enabled, it will re-upload it when you update the library.

There are probably more things that people are asking, but hopefully this helps relive some of the FUD about match.
Score: 77 Votes (Like | Disagree)

Gutted no UK launch yet. Really want to give this a go.

Hackers will love this, stealing legit music for f̶r̶e̶e̶ $25/year


Back in my day, being a hacker required more skills than downloading a torrent.
Score: 13 Votes (Like | Disagree)

Kahnyl
I'm begging some of you to proof read your posts.
Score: 11 Votes (Like | Disagree)

netnothing
So can someone tell me....how does the process work?

You sign up for Match and it...well....matches your music. Does it give you a report allowing you to see what's going to happen.....or does it just start downloading/uploading stuff?


Huh? If you didn't sign up, then you didn't pay anything. How could you have wasted anything if it didn't let you sign up?