Some Retina iPad minis are demonstrating image retention issues, as noted by Instapaper creator Marco Arment, who originally developed a grid test to detect the problem in Retina MacBook Pros.

Image retention was first cited as a potential issue last week, when a rumor suggested that burn-in on Sharp's IGZO panels was causing production delays with the Retina mini's display, leading to significant supply constraints that have resulted in a quiet release for the tablet. 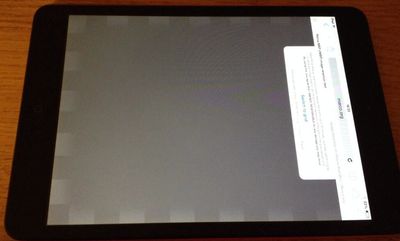 An example of image retention after running the grid test, via Twitter
Displays with image retention are not a new problem for Apple. The original Retina MacBook Pro displays demonstrated severe image persistence problems, with remnants or previously-displayed windows remaining visible on the screen for several minutes. It is important to note, however, that the image retention is temporary and not permanent like the burn-in seen with some plasma displays.

In addition to image retention, some users on the MacRumors forums have also noted that their Retina mini screens are not as vibrant as iPad Air, suggesting the Retina iPad mini may have a smaller color gamut.

Apple's Retina iPad mini is currently available from the Apple Online Store beginning at $399. Orders are currently shipping within 1 to 10 days in the United States depending on capacity and cellular capability, and while Apple has not made the mini widely available in its stores, it is also available in many areas via Personal Pickup.

SVTmaniac
So let me get this straight. Apple owners purchase a device, then take it home and instead of enjoying it, they run multiple torture tests on each piece of hardware looking for some kind of flaw so that they can return it, get a new one, then go home and run the same torture tests again? At what point does any of this sound fun? How about you just take your new toy home, unbox it, and enjoy the damn thing?

joelisfar
Hint: don't stare at the grid test for the 10 minutes or your eyes will develop image retention issues.
Score: 27 Votes (Like | Disagree)

sonic2911
the difference between air and mini retina :)
Score: 19 Votes (Like | Disagree)

Thursday September 29, 2022 12:38 pm PDT by Juli Clover
Tony Blevins, Apple's vice president of procurement, is set to depart the company after he made a crude comment about his profession in a recent TikTok video, reports Bloomberg. Blevins was in a video by TikTok creator Daniel Mac, who was doing a series on the jobs of people he spotted with expensive cars. After seeing Blevins in an expensive Mercedes-Benz SLR McLaren, Mac asked Blevins what ...
Read Full Article • 694 comments