Apple has filed for a United States patent detailing a system for allowing a device to access and share a remote network with a second device using the low-power Bluetooth LE protocol, reports AppleInsider. The patent application was published today and credits Apple engineers Daniel Borges, Jason Giles, and Michael Larson as inventors. 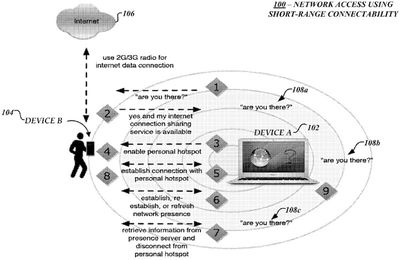 Notably, the application mentions a first device acting as a hotspot and having short-range connectability with a second device, with the second device having access to remote networks. This would be very similar to the rumored interaction between Apple's upcoming iWatch and a second iOS device such as the iPhone, with the iWatch serving as an accessory and giving users easy at-a-glance access to common functions without having to take out larger devices.

The described technology would seem particularly apt for providing intermittent Internet access for the iWatch, allowing it to take advantage of low-power Bluetooth to only intermittently connect to the Internet using an iPhone as a hotspot rather than having to host its own cellular or Wi-Fi connectivity.

The patent also details how a low-power connection protocol such as Bluetooth could prove to be advantageous as the first device remains in a low-power background mode while connecting to a network with the ability to receive push notifications:

In one embodiment, the short-range connectability to the supporting device is provided over a low-power enabled connection protocol such as Bluetooth. In a typical embodiment, the device is able to maintain itself in a low-power background mode while joining the supporting device's shared access service and briefly connecting to the network. In this manner the device may perform such activities as establishing intermittent network presence for receiving push notifications and other messages or updates, or for engaging in other network-related activities while advantageously remaining in low power mode.

Apple has long been rumored to be working on the iWatch, which is expected to provide common functions along with additional biometric integration in addition to serving as an accessory to iOS devices. Apple CEO Tim Cook stated during the company's fourth quarter earnings call last month that Apple still plans to introduce new product categories in 2014, which is a likely timeframe for the release of the iWatch as previously indicated by multiple sources. A report last week also indicated that Apple was close to striking a deal with LG Display to provide OLED displays for the device.

They are patenting internet over bluetooth? How is that new?

And here's why people criticize patents so much. They don't understand a patent, and immediately jump to the idea that there's nothing new.
Score: 27 Votes (Like | Disagree)

no, they are patenting using a low powered protocol on a client device to negotiate a handshake that allows for use of internet services (and other device specific data feeds) from a host device as needed.

Internet over bluetooth has been a thing for a while. Having connection that doesn't drain the battery on either device is a bit more novel.

Furthermore, they are patenting one particular method that they invented to accomplish this. This is what the ignorant who cry over patents don't understand above all. Patents are for methods and processes you came up with to accomplish something. Other people can accomplish the exact same thing before you or after you but as long as you (and they) come up with a different method to accomplish it, then it is patentable.

And that in a nutshell is why the patent system works so well. Lots of different people can come up with lots of different methods to accomplish the same thing and patent it. They take their methods to market and one eventually proves to be the best way to do it. This results in more money for the inventor because the others have to use their own somewhat inferior methods for a while. Eventually the patent expires and anyone can use that particular method. This cycle benefits society and has been doing so for over a century.

But everyone wants to be the guy who profits the most from the "winning" patent design so that incentivizes companies to actually go look for methods to solve problems that have yet to be solved as well as invent new and better methods to solve problems that have already be solved. Otherwise known as R&D. And the cycle continues for the benefit of society.

It's not a coincidence as the number of patents filed has increased that there has been an increase in tech advances. Just look at the last decade. Patent filings, new methods, and tech advances have exploded. Tech progress has been phenomenal recently and consumers have benefited greatly.

As long as we don't allow patent leaches to profit off the work of the innovators, this should continue. The innovators certainly won't continue if they don't get protection from the patent leeches because if anyone can be successful by just leeching off the hard work of others, then the innovators won't stick their necks out to take those risks that benefit us.
Score: 16 Votes (Like | Disagree)

They are patenting internet over bluetooth? How is that new?


no, they are patenting using a low powered protocol on a client device to negotiate a handshake that allows for use of internet services (and other device specific data feeds) from a host device as needed.

Internet over bluetooth has been a thing for a while. Having connection that doesn't drain the battery on either device is a bit more novel.
Score: 15 Votes (Like | Disagree)

Ries
They are patenting internet over bluetooth? How is that new?
Score: 12 Votes (Like | Disagree)

This thing has to be nicer than the galaxy gear.

Played with it at an AT&T store and it is such a joke.


I think any other smart watches are nicer by default, surely ;)
Score: 10 Votes (Like | Disagree)
Read All Comments