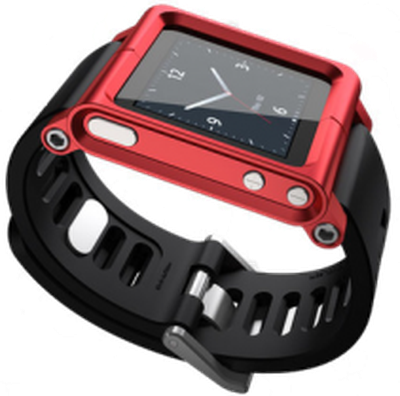 LG Display is reportedly close to a deal with Apple to provide OLED displays for the upcoming iWatch, according to The Korea Herald (via Unwired View). The report also states that RITEK subsidary RiTdisplay will be the other primary display supplier in addition to LG for the smartwatch. Samsung was also said to have met with Apple over becoming a potential supplier for the iWatch, but discussions between the two companies were reportedly "not productive". A report from May stated that Apple had begun sampling 1.5-inch OLED displays from RiTdisplay for the iWatch, as Apple had also hired a senior OLED expert from LG Display this past February.

“Instead of relying on one supplier for its iWatch, which will be unveiled next year, Apple will have two vendors to be safe. The key provider will be RiTDisplay and LG Display will be the second,” Seoul-based HMC Investment Securities’ analyst Kim Young-woo said. “Japan Display might also be a candidate, but so far its capacity seems lacking.”

Apple has been long rumored to be working on the iWatch, which is expected to serve as an accessory to the iPhone and other iOS devices, giving users easy at-a-glance access to common functions along with additional biometric integration. Apple CEO Tim Cook stated in Apple's fourth quarter earnings call yesterday that the company still plans on introducing new product categories within 2014, which is a likely timeframe for the release of the iWatch as previously indicated by sources of the Financial Times as well as supply chain insiders familiar with the matter.

Hopefully we'll see something roll out, I think this product (and the iTV or what ever it will be called) has been waiting too long. Other competitors are catching up


If the Galaxy Gear is any measure of how far those competitors have caught up, I think Apple are fine for now...
Score: 19 Votes (Like | Disagree)

adildacoolset
Unless they can cut the power consumption dramatically, or have some very clever battery technologies, I'd want an e-ink display with a backlight (if it's dark). I hope they know that a watch is going to be useless if the battery doesn't last long. Samsung proved it with the gear.
Score: 14 Votes (Like | Disagree)

prowlmedia
Surprised this wasn't a rumour from Security Analyst Kim Jong-il from KGB Securities or whoever that dude is...;)
Score: 14 Votes (Like | Disagree)

I haven't worn a watch for 2 years. My iPhone 4S took that job over. I am curious to know what utility Apple thinks a smartwatch has for the end user. We'll see in 2014!

Oh geez. Will this line of thought never cease? The poor horse is so mutilated -- is there even anything left to kick?

(If your imagination can take you no further than to see a watch as only a timepiece or jewelery just accept the fact you are not a creative person and think linearly. No shame in that, everyone is widely differently. It's what makes us all unique. But don't beat up people b/c they can think differently and reinvent and update a common object for modern life.)
Score: 12 Votes (Like | Disagree)

A watch is by definition a timepiece.

These new 'wrist computers' aren't watches, they just serve a secondary function as a watch....

Personally, I just cannot see it yet.

Obviously you can't see the forrest for the trees. You also have a rigid thought process. Just accept it. Anytime someone starts off with "...by definition," it's a clue their mind processes with inflexible rules.

So let me speak your language. Definitions by definition may change as society changes or even among different societies. Gay in 1930 meant something entirely different than it does in 2013. In London a subway is a tube; elevator:lift, and so on.

In 1910 bacon was a lunch or dinner food. In 1940 it was used for all meals. In 1940 orange juice was predominantly for breakfast. In 1980 it was for anytime. Public relations and societal acceptance changed all that.

So when you say a watch by definition is a timepiece you are basically saying it can't ever have another meaning which is false because words are created by humans. The truth is a watch is whatever meaning a society puts on it. A lot of people understand the more modern meaning that it's something worn on the wrist that provides information and other functionality.
Score: 8 Votes (Like | Disagree)