Apple is working on a fix to address issues with the native Mail client in OS X Mavericks, including problems with Gmail, stability, and smart mailboxes, reports 9to5Mac.

There have been widespread reports of Mavericks users experiencing problems receiving messages, sorting messages into folders, and deleting messages. Apple is aware of the problem and has seeded an updated Mail app to both Apple employees and testers in Apple's AppleSeed customer program. 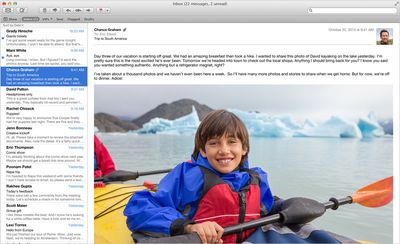 Apple is telling testers that the updated Mail app, which carries the same Version 7.0 as the current app but an updated build number of 1822 compared to 1816 for the publicly available version, fixes those issues while addressing overall stability and smart mailbox enhancements. The company is also asking users with the updated Mail app to test for the following things:

Currently, the update is only available as a downloadable patch for Apple employees and testers rather than a regular update to Mavericks. While OS X 10.9.1 is well into development, it's not yet known whether the Mail update will roll out separately or be included with OS X 10.9.1.

gmanist1000
I'm hoping all native apps will be downloadable through the Mac App Store with future OS releases.

Same goes for iOS, seems like the best way to send out updates as quickly as possible - rather than updating the entire OS itself.
Score: 15 Votes (Like | Disagree)

jtrauscht
This is why I always wait until the x.0.1 version is released before I upgrade.
Score: 6 Votes (Like | Disagree)

josh.b
Grow a pair pessimists. Every new release has its teething problems on any software Apple or not. Apple did a fantastic job with Mavericks and if you are such whiney rats why do you keep Mavericks? Oh right because deep down you know it is great but you love to complain because you can never get enough pats or something. /woof
Score: 4 Votes (Like | Disagree)

haravikk
I'm really impressed by just how many bugs the Mavericks version of Mail seems to have considering Apple haven't changed much in it this time round! I assume they've added support for all the new APIs but I don't see how that could break so much!
Score: 3 Votes (Like | Disagree)

I actually have to use the mouse and click a button now.


The way you wrote that makes it seem like a ridiculously huge effort.
Score: 3 Votes (Like | Disagree)
Read All Comments