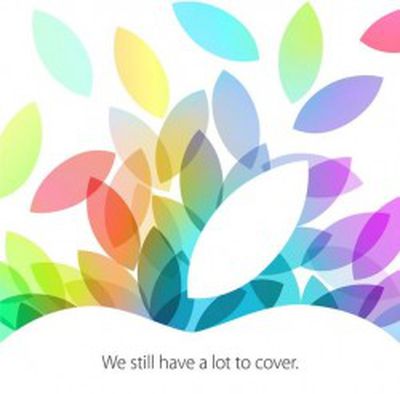 With just four days to go until Apple's October 22 media event in San Francisco, expectations for what will be shown are in many cases continuing to firm up, while in other cases questions remain. Our regularly updated Roundups section continues to offer a good overview of what is expected for each product and highlights the significant number of Apple products due for updates. Among the expectations for next week:

- iPad mini: Retina display expected, but there have been questions about production and whether Apple be able to ship the new device in significant quantities, if at all, before the holidays. [Read More]

- OS X Mavericks: Reportedly due for launch before the end of the month, we should see a final unveiling next week. Other software updates including new versions of Apple's iWork and iLife suites, including iWork for iCloud, are also expected. [Read More]

- Mac Pro: Announced by Apple as launching "this fall" following a sneak peek at WWDC in June, Apple's radically redesigned professional desktop should get a thorough introduction next Tuesday. Some have speculated that updated displays may arrive to complement the new Mac Pro, but there has been no specific evidence of a display refresh. [Read More]

- MacBook Pro: An update for Apple's Retina MacBook Pro line has been expected for several months, moving to Intel's new Haswell processors for improved battery life. While it seems that Apple would want to feature the MacBook Pro improvements at its event, the list of products to be covered is beginning to get rather long and so it is unclear if the updated notebooks will make an appearance at or alongside the event or at a separate time. [Read More]

- Mac mini: There have been no specific rumors about the Mac mini, but it too is due for an update to Haswell processors. [Read More]

- An Apple TV wildcard: There have been some rumblings over the past several months that Apple is planning some sort of TV-related announcement for late this year, but there has been no concrete evidence of any imminent introduction. While Apple has been said to be planning its own connected television set product, that product may not be ready and the effort could continue to progress incrementally with an updated set-top box.

Updated iWork and iLife too.

About bloody time, too!! Most of this stuff was announced in June. It is very disgraceful making the public wait so long... Especially for devices like the new Mac Pro. Just think of how much income Apple has lost by delaying the release of such a device like that. The same with OSX Mavericks and IOS 7.


Clueless. When those things were announced in June, they were announced for either fall or by the end of the year. Not a single one of those is late yet, all the ones that had announcements are shipping when Apple said they would.

The two OS updates had their first betas shipped at the time of the announcements. For those, they absolutely need a few months in beta to work the bugs out and let devs update their apps to the new OS. And the Mac Pro was announced having upcoming Xeon chips, those chips only started shipping recently.

Sounds like you only read the headlines on those announcements earlier this year and totally missed the details. Pay more attention next time.
Score: 7 Votes (Like | Disagree)

MN7119
So annoyed that new MacBook Pro is taking so long to get an update. My 2006 White MacBook is in life support and I need to pull the plug asap.:mad:
Score: 7 Votes (Like | Disagree)

iSee
A "Pro" display seems to make so much sense... the current model is long in the tooth and clunky relative to the iMac, a bragging point of the new Mac Pro is its support for 4K monitors, TB2 will be here, USB3 is here.

But it wouldn't surprise me if that's something that comes out in the spring.
Score: 7 Votes (Like | Disagree)

gugy
MacPro and new ACD displays is what I want.
Score: 7 Votes (Like | Disagree)
Read All Comments