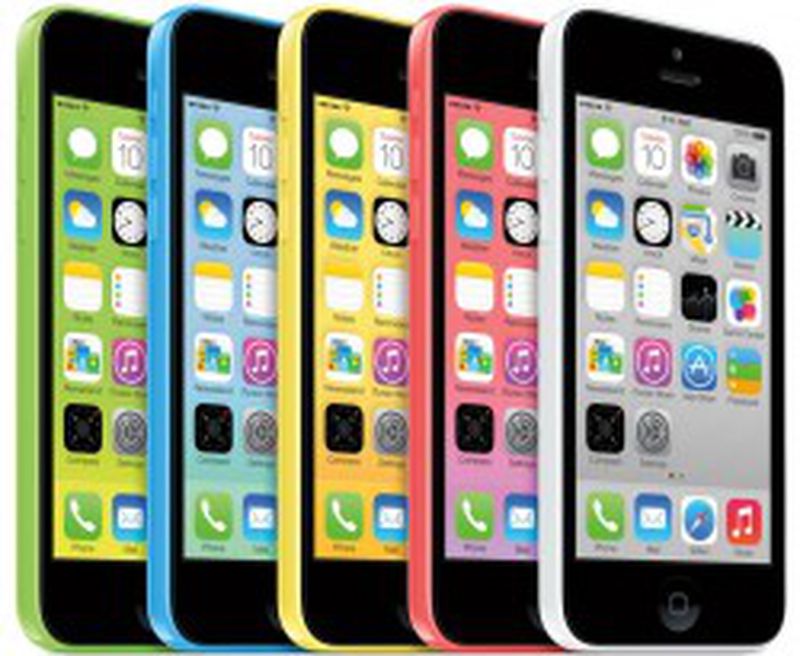 Following announcements from Best Buy and RadioShack that they will be offering $50 gift cards to iPhone 5c customers that will bring the prices down to $50 for a 16 GB model with a two-year contract, Walmart will be undercutting even those offers starting today by dropping its pricing to $45, reports MarketWatch.

While Best Buy's current offer is good only through next Monday and RadioShack's is scheduled to run for about a month, Walmart's pricing will be valid throughout the holiday shopping season. Walmart has been offering the iPhone 5c for $79 since launch, a $20 discount from standard pricing.

Price drops around the holidays are not terribly unusual for major iPhone retailers, but stores are being rather aggressive in announcing price drops on a brand-new iPhone model so soon after launch. iPhone 5c models have been in relatively good supply since their launch, while the more expensive iPhone 5s has seen significant shortages. The iPhone 5s has not seen any significant sale announcements, although Walmart has been offering the 16 GB model for $189, a $10 discount from normal pricing, since launch.

It's literally identical to the 5, minus a change in lens and a tad longer battery.

It doesn't have the nicer materials.

So if the 5 is still $549 for a 16GB, then you cannot sell the 5c at the same price especially in a plastic shell.

Something that is selling well doesn't need discounts 2 weeks after launch.

BTW, in capitalist systems you want to have the lowest price so folks buy from your store versus another. Retailers are competing with each other (including Apple Store) and they are also competing against the iPhone 5s (which they don't have in decent supply). Given the fact that the report I linked shows the iPhone 5c is selling well then it must simply be selling well directly through Apple or through carriers. These retailers want to make their numbers too, but until Apple starts shipping them quantities of iPhone 5s, they have to sell what they can get (iPhone 5c).
Rating: 12 Votes

BC2009
For those who are trying to say that the iPhone 5c is not selling well....

Just because supply of iPhone 5c is healthy, does not mean it is not selling.
Rating: 10 Votes

512ke
I love how people can post that the 5C isn't selling well when on the front page of A. I. There is a chart showing how it's the number two best selling phone for several of the largest U. S. Carriers. Classic. Prejudice trumps reality.
Rating: 8 Votes

Just because supply of iPhone 5c is healthy, does not mean it is not selling.


Something that is selling well doesn't need discounts 2 weeks after launch.

TWSS37
This will be free day after Thanksgiving, you can mark that down in pen.
Rating: 5 Votes


Love this post! Thank U. I'm so sick of people downing the 5C, especially when they talk about the plastic. I can easily tell when someone hasn't even touched it. It's extremely solid and it doesn't plasticy at all. Very well built phone with nice upgrades over the iPhone 5. :)

I don't appreciate your condescending response.

If the phone was selling so well they wouldn't offer a discount.

Hence the sales aren't doing well. Got that?


There wasn't anything condescending about his post. Not one thing.
Rating: 4 Votes

I don't appreciate your condescending response.

If the phone was selling so well they wouldn't offer a discount.

Hence the sales aren't doing well. Got that?


Best Buy is doing the same $50 discount on the Galaxy S4, S3 and Note 2 with a two-year contract. Best Buy's discount is in the form a gift card.

Walmart is offering the Galaxy S4 for $138 on contract PLUS you get a $40 gift card with it. This phone normally retails for $199.

So are sales bad on these phones?

According to this report (http://appleinsider.com/articles/13/10/04/apples-iphone-5s-tops-sales-charts-at-big-4-us-carriers-iphone-5c-close-behind) the iPhone 5c managed to nab the #2 spot at AT&T and Sprint in September and the #3 spot at Verizon and T-Mobile, despite only being for sale for 10 days during the month.

Hence the sales are doing pretty well. Got that?

eternlgladiator
Seems like they can't give these away...
Rating: 4 Votes

Blakjack
This phone will be the most popular phone in America by February.
Rating: 4 Votes
[ Read All Comments ]