A Closer Look at Apple's A7 Chip from the iPhone 5s

Earlier this week, Canadian firm Chipworks released some photos showing the interior of Apple's new A7 chip from the iPhone 5s, as well as the new M7 "motion coprocessor" and other components.

The firm has now had a chance to look at the A7's transistor die photo in detail and make a preliminary effort at identifying the various components of the chip. Chipworks stresses that the identifications are still tentative pending full circuit analysis, but that most of the identifications appear to make sense.

We publish this with the caveat that these are best guesses – we have not done any real circuit extraction to confirm them. The dual-core CPU and cache make up ~17% of the die area, and the quad-core GPU and shared logic about 22%. The CPU itself is not packed the same way as the A6 (see below), it looks much more like a conventional automated layout; although Linley Gwennap thinks that it’s still Apple designed, not the first ARM A53/57 usage.

The analysis identifies the CPU portion of the chip as being at the lower left of the image, with the quad-core graphics located at lower right. Previous work by AnandTech has identified the graphics as Imagination Technologies' PowerVR G6430 configuration, a member of the new "Rogue" series of GPUs from the company.

Also of interest is a large block of static RAM (SRAM) located along the right edge of the chip just above the graphics cores. Chipworks says that based on its size it represents approximately 3 MB of storage and that it could be the "secure enclave" used to house data associated with the Touch ID fingerprint sensor found on the iPhone 5s. No equivalent SRAM block is included on the previous-generation A6 chip from Apple.

The A7 is otherwise a fairly standard chip compared to Apple's previous designs, measuring only slightly larger than the A6 but offering significantly greater performance.

keysofanxiety
People talk about Apple's lack of innovation, and yet Apple's A7 is one of the most innovative pieces of hardware available on a phone today. Amazing to think Apple designed this thing. Designing your own chip hardware means you're not at the mercy of another company's pipeline.

This is the start of something great.
Score: 38 Votes (Like | Disagree)

AngerDanger
I'll admit that it's a nice, contemporary design, but if they opened it up in the middle, it would appear to be more spacious. This would also allow for the addition of a fountain or modern sculpture. But why stop there? 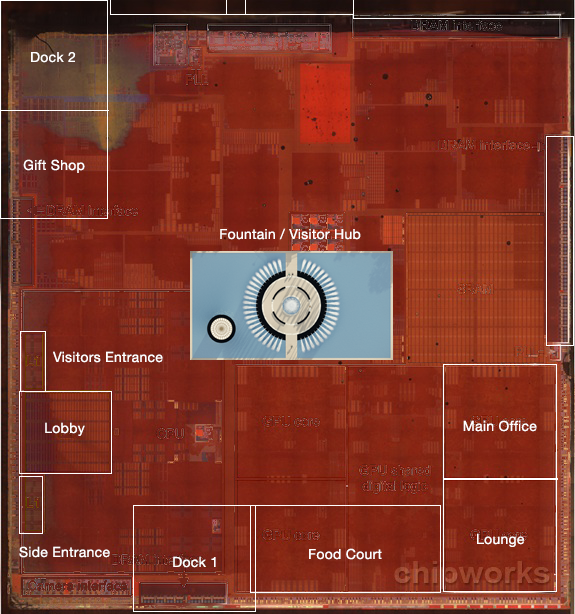 adildacoolset
lol at all the android "spec-whores" who think that quad-core processors are necessary. This has 2 CPU cores and outperforms the latest "octa" processors. This is top-class engineering.
Score: 14 Votes (Like | Disagree)

....designed by Samsung in South Korea.

Hold on a sec. Why is it that all over the net, people post that its really a Samsung chip that Apple just branded and added some custom additions? I don't get those guys. It's clear that Apple Designed the Chip and Samsung Chip Fab division manufactured it according to Apple Spec. Or am I making an incorrect statement here?
Score: 13 Votes (Like | Disagree)
Read All Comments

Saturday March 6, 2021 7:33 am PST by Joe Rossignol
Apple on late Friday evening added a "while supplies last" notice to its iMac Pro product page worldwide, and removed all upgrade options for the computer, leaving only the standard configuration available to order for now. We've since confirmed with Apple that when supplies run out, the iMac Pro will no longer be available whatsoever. Apple says the latest 27-inch iMac introduced in August...
Read Full Article • 303 comments

Saturday March 6, 2021 6:00 am PST by MacRumors Staff
iPhone rumors are heating up, with noted analyst Ming-Chi Kuo this week releasing a wide-ranging report outlining his expectations for the iPhone lineup over the next three years. This week also saw rumors about OLED displays potentially coming to iPad and Mac starting next year, increasing signs of AirTags functionality in iOS 14.5 betas, and more, so check out all of the details below! i...
Read Full Article • 55 comments