The Federal Aviation Administration advisory committee has recommended that electronic device restrictions on commercial aircraft be relaxed. According to the committee, airline passengers should be permitted to use smartphones, tablets, e-readers, and other personal electronic devices during taxi, takeoff and landing.

Current rules prohibit the use of electronic devices such as the iPad or the iPhone below 10,000 feet, which means airline passengers are instructed to power off their devices as the plane ascends and descends. Pilots and crew, however, are allowed to use iPads during all phases of flight and many airlines have replaced pilot flight bags with iPads to reduce weight and save money. 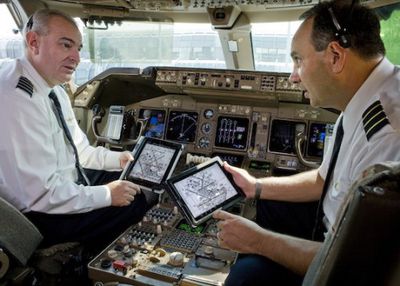 The Federal Aviation Administration began reexamining the regulations that ban electronic device usage below 10,000 feet last year, and in March, the FAA’s advisory committee reported that it hoped to loosen device restrictions by the end of the year.

Under today’s recommendation, passengers would be able to use most devices, though some, like Apple’s iPhone, would need to be switched to airplane mode. Downloading data, browsing the web, and talking on the phone would remain prohibited, though reading e-books, listening to music, watching movies, and playing games would be permitted during all phases of flight.

The recommendation will be delivered to the Federal Aviation Administration next week, but it remains up to the FAA to decide whether to follow the recommendations of the committee. The FAA created the committee and was involved in committee deliberations, so it is likely that some of the changes will be implemented, though a timeline for the change is thus far unknown.

these restrictions were nonsense


but what's so wrong with having them?


I dunno, how about the fact that they are nonsense?
Score: 14 Votes (Like | Disagree)

I'm OK with this as long as people text, play games, or listen to their headphones. I'm not Ok with this if people are talking loudly on their phone.

Yeah! I wish those people would step outside to place their call, preferably during takeoff :D
Score: 10 Votes (Like | Disagree)

And tomorrow morning I fly to LA!... a week too early to take full advantage of this new policy.


A week? In a week it goes to the FAA, who then decide what they want to do about it and start the rule-making process which may eventually result in the rules being changed. Then those rules go to the airlines who decide whether they are going to relax their policies and change their safety videos (even if the FAA says you can, that's a minimum policy, the airlines are free to continue to enforce something stricter) and then, only then, will anyone be taking advantage of anything.

I'm pessimistically going for a year or two .. and another 10 before other aviation authorities in other parts of the world decide to follow suit, if they do.
Score: 9 Votes (Like | Disagree)

Illusion986
Definitely about time! So many rules are active from 10-20 years ago that no longer make sense.
Score: 8 Votes (Like | Disagree)

kdarling
I see the same questions and comments over and over again, from people are obviously neither pilots nor engineers. Let's review some:

But my radio / device is in receive only mode.

I don't understand why pilots can use iPads but I can't.

The use of those two iPads in the cockpit has taken most airlines over a year to test and get approved. There is no way that those results carry over to dozens of other people using electronics.

How can electronics so far from the cockpit interfere?

The radio antennas, anti-collision antennas, their wires, and all the modern electronic control wires run through the cabin. You can easily be just a few feet away from one of those. There are cases where pilots have gotten emergency automatic climb/descend commands that likely came from passenger electronics in a seat nearby one of those cables.

Why aren't they worried about outside interference as much?

An airplane is what's called a Faraday Cage, because it's a closed metal tube (or a composite with embedded metal for lightening protection). This prevents outside signals from entering the cabin (except through the windows). It also tends to keep the signals that originate inside, inside and bouncing around.

But interference can't bring down a plane, so why should I worry?

Text messages don't stop a car's engine from working, yet they have caused many wrecks and deaths.

Interference, as in disabling something, is usually not the problem. The problem is causing distractions to the pilots or interference to instruments. Safe flight, especially when in the airport area for landing or takeoff, is highly dependent on good communications and no distractions. Non-pilots don't realize that it takes very little to cause an aviation accident, especially when low and slow and in a crowded airspace. All it needs is a chain of little mistakes.

This is because the more altitude you have, the more time that pilots have to debug a problem.

But some airliners have WiFi

Above 10,000 feet. They also use low power, and expect the passenger devices to likewise use low power. See below.

Got an example of an interference?

I have previously posted quite a few examples from the NASA database. GSM buzz, false anti-collision alarms, navigation instrument wonkiness, and autopilot shut-offs are the main ones.

Handled high up, they're not so bad. Within the airport environment, they're a potential accident chain cause.

Here's a good example: Recently, Boeing engineers were certifying one of their airliner models for WiFi. Quite by accident, they found that some laptops ramped up their WiFi power, causing the plane's WiFi to ramp up, and the interference caused the pilots LCD displays to go blank. (!) They fixed it by adding more display shielding, but ...

Consider if that had happened while landing at night or in clouds. It's been proven many times that without working instruments in dark or sightless conditions, a pilot's (and by extension, the passengers') life expectency is measured in minutes. (There was a 747 that crashed on takeoff at night, because of faulty reading instruments. The pilot accidentally rolled it upside down into the sea.)

Would you risk your familiy, or your child's life, just to use your iPad a few minutes more?

I think, until everything on an airliner is shielded and all signals sent by fiber optics, that this is a mistake.
Score: 6 Votes (Like | Disagree)
Read All Comments