The U.S. Federal Aviation Administration is reexamining regulations banning the use of digital devices like the iPad or Amazon Kindle during taxi, takeoff and landing of commercial aircraft. Passengers are banned from using electronics while the aircraft is under 10,000 feet, but pilots and crew are allowed to use their iPads during all phases of flight. This is especially important because many airlines are replacing pilot flight bags with iPads to reduce weight and save money. 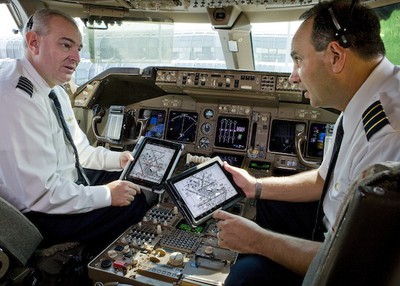 When I called the F.A.A. last week to pester them about this regulation — citing experts and research that says these devices could not harm a plane — the F.A.A. responded differently than it usually does. Laura J. Brown, deputy assistant administrator for public affairs for the F.A.A., said that the agency has decided to take a “fresh look” at the use of personal electronics on planes.

Good news for some, but there are some peculiar quirks to the FAA's bureaucratic approval process. Under current guidelines, individual tablet models will need to be tested separately -- on each different aircraft model. The iPad, iPad 2 and iPad 3 will be individually tested, each on a separate flight, on an empty plane, for the Boeing 737, 747, 757, etc. Smartphones are not being considered for approval, which will be good news for those hoping to keep the skies a relatively quiet place.

The F.A.A. said it is exploring how to bring together electronics “manufacturers, consumer electronic associations, aircraft and avionics manufacturers, airlines, pilots, flight attendants and passengers” to figure out how to allow greater use of these electronics on planes. That’s a lot of people, organizations and bureaucracy to juggle. Plus the money to do this testing is going to have to come from somewhere.

We are a long ways off from seeing iPads in use during takeoff and landing, but the fact that the FAA is willing to consider changing the regulations is very promising.

rotobadger
Although it would be nice to be able to use my iPad or iPod on and before takeoff, it's really not that big of a deal. Read a magazine or do a crossword for 15 minutes.
Score: 16 Votes (Like | Disagree)

caligomez
I always thought it was all about not having the passenger during takeoff and landing, which are key periods where things might go wrong..

We obviously all know that iPads and other devices can't bring down (or interfere) the aircraft communications systems..

I mean, haven't we all left it on Airplane mode/Sleep at one time or other?:D
Score: 12 Votes (Like | Disagree)


But yes, my understanding has always been that the rule was more about removing extra distractions during the two most likely phases of flight for a crash to occur. If an evacuation is necessary, you need passengers paying attention.


That's not the reason for the rule:

The F.A.A. admits that its reasons have nothing to do with the undivided attention of passengers or the fear of Kindles flying out of passengers hands in case there is turbulence. That leaves us with the danger of electrical emissions.

I wonder if they'll allow iPhones during taxi/takeoff/landing as long as they're in Airplane mode.

BornAgainMac
The older man seems upset in the photo. The younger one looks like he messed up on something.
Score: 9 Votes (Like | Disagree)

Ok for iPad owners. But what about Galaxy Tab owners?


The story seems to imply that this is "bureaucracy." But in the interests of safety, of course each device will have to be tested in each airplane. The radiation emissions will be different, and the wiring of each model of plane is different.

But if pilots are already using iPads during takeoff and landing that implies that they have been tested and proved to be safe. And let's face it, whereabouts on an aeroplane is an iPad etc. likely to be the greatest risk? Yep, on the flight deck which is stuffed to the gunwales with electronic equipment. So I would say it's bureaucracy.
Score: 8 Votes (Like | Disagree)
Read All Comments