Users that have a third-generation Apple TV running the 6.0 software can use an iPhone, iPad, or iPod touch running iOS 7 to automatically transfer network settings, Apple ID information, and language preferences to the Apple TV, allowing for faster setup. The information exchange is done via Bluetooth by touching the iOS device to the Apple TV, taking advantage of the Bluetooth LE built into all Apple devices after the iPhone 4. 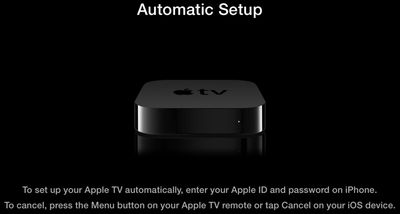 Apple's support article includes a detailed list of instructions on the process:

2. Unlock your iOS 7 device and ensure that Bluetooth is enabled. Also ensure that you are connected to the Wi-Fi network you want to use with Apple TV.

4. Enter your Apple ID and password on your iOS device.

6. Your Apple TV will start the configuration process, including connecting to your Wi-Fi network, activating Apple TV, and setting up your iTunes Store account.

Prior to the implementation of the tap setup feature, entering Apple TV information was a tedious process that required connecting a Bluetooth keyboard or using the Apple TV remote to pick and choose letters.

As noted by Apple, the transfer requires an iPhone 4s or later, a third-generation iPad or later, an iPad mini, or a fifth-generation iPod touch. The feature does not work with the iPhone 4 or the iPad 2.

DaGreat01
Such a good feature. Typing in information with direction arrows and a select button sucks.
Score: 17 Votes (Like | Disagree)

MacGeek1987
Not sure why tapping the devices is necessary, but I'd gladly do so instead of using that ridiculous "remote" to select one character at a time.
Score: 10 Votes (Like | Disagree)

Given that it's Bluetooth, why do the devices need to touch at all?

This isn't far off from the 'bumping' they mocked (though I realise there's a huge difference between this and AirDrop).


They don't need to touch. But touching ensures that the iOS device is close enough to the Apple TV, which is why I assume Apple specifies a touch in the documentation.
Score: 10 Votes (Like | Disagree)

Carlanga
lol, tedious...
takes about 4 minutes w the remote.
Either way is a welcome addition'
Score: 5 Votes (Like | Disagree)

Anonymous Freak
Now I want to wipe my :apple:TV 3 just to see this in action!

Edit: Okay, that was pretty slick.

DarkWinter
Given that it's Bluetooth, why do the devices need to touch at all?

This isn't far off from the 'bumping' they mocked (though I realise there's a huge difference between this and AirDrop).

Edit: It may be that they're doing something clever with the iOS device's accelerometer readings to initiate the process whilst ensuring that they're within Bluetooth range...?
Score: 4 Votes (Like | Disagree)
Read All Comments