Wednesday September 18, 2013 2:14 pm PDT by Jordan Golson
With iOS 7, Apple now allows app downloads up to 100MB over cellular connections, prompting users to connect to Wi-Fi for larger apps. Apple previously boosted the limit to 50MB with the launch of the third-generation iPad in March 2012. Before that, users could only download 20MB apps over a cellular connection. 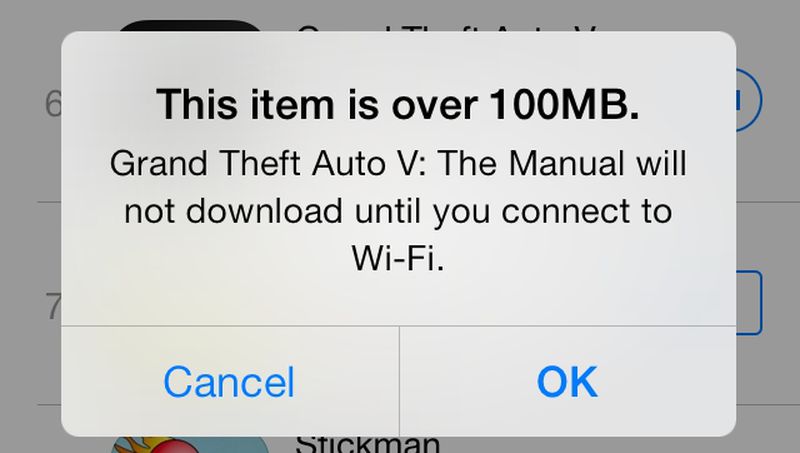 Developers frequently work hard to keep their apps under the over-the-air download limit, as they believe going over that limit can reduce the likelihood of spontaneous purchases.

Sent with my iPhone with unlimited data
Rating: 18 Votes

JosephAW
For us unlimited data users, they need to remove any cap.
Rating: 8 Votes

theheadguy
Is it just me or is the "100" not spaced correctly?
Rating: 8 Votes

Carlanga
They know apps keep getting bigger and then they add 64 bit, but didn't upgrade size configurations on new iPhones since 3GS. :mad:
Rating: 8 Votes

for unlimited LTE users like myself, it would be no limit.
Rating: 5 Votes

unplugme71
When the app store first came out, one year later I had about 2.5GB of apps. Now I have 17.3GB of apps.

Eat the basic 250 MB T-Mobile plan in a little over two big downloads.

That seems a LOT more logical.

Am I missing something???
Rating: 4 Votes

dannys1
I dont really understand why there is a global cellular data cap anyway. Its only protecting stupid users.

If people are that bothered have a limit in options to prevent downloads over a certain amount and have it activated by default. The unlimited users can just switch it off, the people who can't trust themselves can set it to 20mb. I dont see the need for it to be a global iOS limitation.

This is the only reason I want my jailbreak on iOS7 - so I can make all apps think i'm on wifi all the time
Rating: 3 Votes


It does look weird. The 1 too far to the left.