Taiwan's Apple Daily has posted a new video [Google translation, via iPhone Hacks] showing a hands-on overview of the plastic rear shell of Apple's "iPhone 5C". While the shell has been seen a number of times in photos and a few videos, Apple Daily highlights the durability of the shell while also taking measurements of the part with a digital caliper. Assuming the part is a legitimate back shell sourced from Apple's supply chain, the report offers a few additional details about what to expect from the iPhone 5C.

In the durability tests, Apple Daily placed the shell in a plastic bag with a key and some coins before shaking the bag vigorously, then removing the items and attempting to directly scratch the shell with the key. While the video is somewhat blurry at times, the accompanying article notes that there were no visible scratches on the shell. According to sources, the shell scores a high "8H" rating on the pencil hardness test.

Based on caliper measurements, the iPhone 5C measures 124.55 mm tall x 59.13 mm wide, in line with case makers' design drawings showing it slightly larger than the iPhone 5/5S due to the thicker plastic shell. Apple Daily measure the thickness of the device at 8.98 mm compared to 8.50 mm in the design drawings, but Apple Daily has paired the shell with a front panel that sticks out somewhat from the rear shell and it is unclear if that panel is seated correctly to provide accurate measurements.

The report also includes an image of an iPhone 5S rear shell showing the pill-shaped window for the rear camera's dual-LED flash. The shell is blue in color, but appears to have some sort of coating applied to it. Another blue iPhone 5S shell also appeared in photos today, although its authenticity is also very questionable.

radiohead14
the 5C looks worse and worse every time i see more photos of it.
Score: 30 Votes (Like | Disagree)

TWSS37
I honestly think most people don't mind plastic; it's just the posters who have taken such a hardline "OMG Samesung uses plastic lolllllllllllllllllllll" stance that convincing them that there are benefits, which include reduced cost and increased durability, is virtually impossible.
Score: 16 Votes (Like | Disagree)

Shame on you apple...you can not go from to expensive to too cheap don´t you?

Forgive them Steve...they do no to what they are doing....

lets hope this rumors are not true

Yet, iPhone 1 to iPhone 3G/3GS went from aluminum to plastic under Steve's watch. 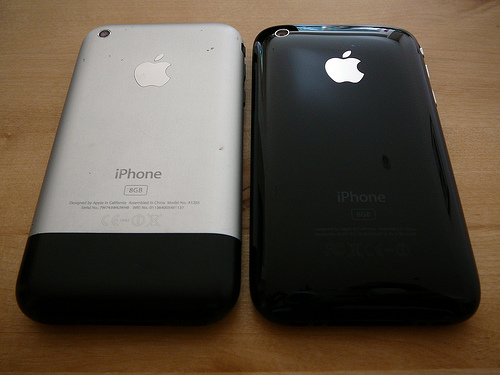 Tuesday April 13, 2021 9:04 am PDT by Juli Clover
Following an overnight leak by Siri, Apple today officially announced that it will be holding a special "Spring Loaded" event on Tuesday, April 20 at 10:00 a.m. Pacific Time at the Steve Jobs Theater on the Apple Park campus in Cupertino, California. As with all of Apple's 2020 events, the April 2021 event will be a digital-only gathering with no members of the media invited to attend in...
Read Full Article • 277 comments

Monday April 12, 2021 8:00 am PDT by Joe Rossignol
Starting with iOS 14.5, iPadOS 14.5, and tvOS 14.5, Apple will be requiring apps to receive a user's permission to track their activity for targeted advertising purposes, as part of a privacy measure known as App Tracking Transparency. Ahead of App Tracking Transparency being enforced, Apple CEO Tim Cook has participated in a privacy-focused interview with the Toronto Star, telling the...
Read Full Article • 154 comments