How to Change App Icons in iOS 14

Customize your home screen and include custom icons for your favorite apps.

Following last week's management shuffle at Microsoft, the company's Surface team has taken over testing its prototype smart watch, including variations with the same connector that Microsoft uses on its Surface tablets. According to The Verge, Microsoft's smart watch prototypes were previously tested by the Xbox accessories team.

The move to the Surface group underlines a recent organizational change at Microsoft that aligns Xbox hardware and Surface hardware into a single division, with former Windows chief Julie Larson-Green now responsible for all of Microsoft's hardware efforts.

Microsoft Smart Watch Concept via Fortune.com
In addition to a potential Surface connector that could allow a smart watch to interface with existing Surface tablets, Microsoft is also said to be testing smart watches that have 1 1.5-inch display, a heart rate monitor, and are running a modified version of Windows 8.

As Microsoft experiments with its smart watch, it appears Apple is in the prototype stages as well. According to a report yesterday, Apple has begun "aggressively" hiring new employees to help with the smart watch, which is now expected to be released in late 2014. Apple's own smart watch is expected to run the full version of iOS and could include a heavy focus on biometrics and health related applications.

Along with Microsoft and Apple, both Google and Samsung are said to be working on smart watches of their own. At this point in time, it seems all companies are in the testing phases with no indication of which smart watch might hit the market first.

bbeagle
According to Microsoft fans, a Microsoft watch won't be good unless it's a full computer and runs all Windows programs including Office.
:rolleyes:
Score: 32 Votes (Like | Disagree)

Jack97
Honestly, if apple announced they were working on a magical iBrick these other companies would start developing one as well. :rolleyes:
Score: 28 Votes (Like | Disagree)

So tell me again, how do you do a CTRL-ALT-DEL on one of these?
Score: 17 Votes (Like | Disagree) 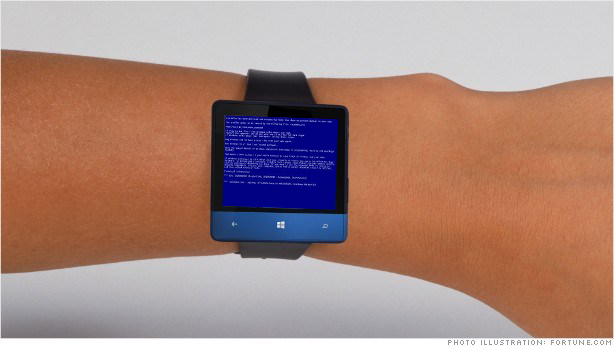 I hope everyone else releases their smart watches first, so apple can blow them out the water when the time comes :D


All relative. It's more about seamless integration. And if you're an iOS user - I'm guessing Apple will provide a superior product for iOS users. And conversely - if you're a MS user - then their smartwatch will offer better integration for their ecosystem.

According to Microsoft fans, a Microsoft watch won't be good unless it's a full computer and runs all Windows programs including Office.
:rolleyes:


A lot of people want iOS fully on their wrist. No different. Oh - I get it - this was a jab against Microsoft fans?

Honestly, if apple announced they were working on a magical iBrick these other companies would start developing one as well. :rolleyes:

A lot of companies have been working on smart watches - long before Apple "announced" they were working on one.
Score: 8 Votes (Like | Disagree)

blackhand1001
The live tiles of windows 8 actually are perfect for a watch. This should be interesting.
Score: 8 Votes (Like | Disagree)
Read All Comments

Sunday September 20, 2020 8:43 pm PDT by MacRumors Staff
Updated on September 22nd with hands on video. In iOS 14, Apple introduced ‌the concept of Home Screen‌ widgets, which provide information from apps at a glance. Widgets can be pinned to the Home Screen in various spots and sizes, allowing for many different layouts. Despite the relative lack of...
Read Full Article • 93 comments

Monday September 21, 2020 3:26 pm PDT by Juli Clover
With the Apple Watch Series 6, Apple introduced two new band options, the Solo Loop and the Braided Solo Loop. These new bands are unique because they have no clasps, buckles, or other fasteners, and instead use a stretch design to allow them to pull onto the wrist over the hand. Because these bands are not adjustable, Apple sells each one in nine different sizes to make sure each person...
Read Full Article • 364 comments

Tuesday September 22, 2020 3:25 pm PDT by Juli Clover
Apple with iOS 14 introduced widgets on the Home Screen, leading to unprecedented levels of customization for the iPhone. Combined with Shortcuts that let you change an app's icon, iOS 14 lets you create a whole new look for your Home Screen. Subscribe to the MacRumors YouTube channel for more videos. We've been following along with some of the creative alternative Home Screen designs that M...
Read Full Article • 78 comments

Monday September 21, 2020 10:34 am PDT by Juli Clover
Apple today seeded the first public betas of upcoming iOS 14.2 and iPadOS 14.2 updates to its public beta testing group, a few days after seeding the first betas to developers and a little less than a week after releasing the iOS 14 and iPadOS 14 updates. Public beta testers who have signed up for Apple's beta testing program can download the iOS and iPadOS‌ 14.2 updates over the air after ...
Read Full Article • 59 comments

Tuesday September 22, 2020 8:56 am PDT by Hartley Charlton
Microsoft has today announced plans to bring a new design to its Outlook for Mac app along with several other improvements and features for Outlook on iOS and watchOS. In preparation for the public release of macOS Big Sur, Microsoft has been testing a new design for Outlook on Mac. The design includes Microsoft's Fluent icons and several design cues from Big Sur such as rounded corners....
Read Full Article • 115 comments

Sunday September 20, 2020 10:00 pm PDT by Eric Slivka
Increased competition among Apple's suppliers for mini-LED display chips will accelerate the company's adoption of the advanced technology in its iPad and MacBook lineups, according to a new research note from analyst Ming-Chi Kuo seen by MacRumors. Kuo says that while Epistar had been predicted to be the exclusive supplier of mini-LED chips for Apple products in 2021, Sanan Optoelectronics...
Read Full Article • 87 comments

Wednesday September 23, 2020 4:37 am PDT by Tim Hardwick
Apple's introduction of widgets on the Home Screen in iOS 14 has driven a surge in interest among users looking to customize their iPhone, and that has reportedly had a knock-on effect for Pinterest, whose iOS app has seen record downloads as users flock to its content seeking design inspiration. As reported by TechCrunch, App Store intelligence firm Apptopia was first to note the impact of ...
Read Full Article • 29 comments

Tuesday September 22, 2020 10:08 am PDT by Juli Clover
Apple today seeded the eighth beta of an upcoming macOS Big Sur update to developers for testing purposes, close to a week after releasing the sixth beta and more than two months after the new update was unveiled at the Worldwide Developers Conference. The macOS Big Sur beta can be downloaded through the Apple Developer Center and once the appropriate profile is installed, subsequent betas...
Read Full Article • 190 comments

AT&T Already Working on 6G, Says 5G iPhones Might Not Be 'Massive Event' Due to Economic Uncertainty

Monday September 21, 2020 10:05 am PDT by Joe Rossignol
Apple's upcoming launch of 5G iPhones might not be a "massive event" due to economic uncertainty amid the global health crisis, AT&T Communications CEO Jeff McElfresh said in a paywalled interview published by CNBC. "I do believe that you will see many of the iPhone subscribers move to upgrade to the device," said McElfresh. "But I wouldn't forecast that it's going to be a massive event. I...
Read Full Article • 139 comments