'Almost Bezel-Free' Redesign for iPad Mini Coming, but Still No Retina Until Early 2014? 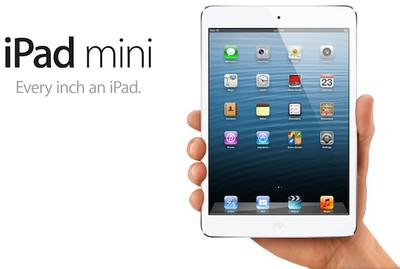 According to the report, the Retina iPad mini will see an "almost bezel-free" design, presumably referring to the sides of the device, which are already fairly narrow. The report is somewhat confusing about just what aspects of the redesign will appear when, also mentioning a lighter and thinner design for the new non-Retina model later this year.

Apple is reportedly aiming to use Retina panel technology equipped with 2,048 by 1,536 resolution in the next generation 7.9-inch iPad mini. Apple is also said to be revising the design of the chassis to give the next-generation iPad mini an almost bezel-free look.

While the new iPad mini may not be availabe during the year-end shopping season, Apple reportedly may first release a slightly updated version of the current iPad mini in the second half of 2013, which is expected to be lighter, thinner and equipped with improved specifications, the sources said.

Digitimes' report is very similar to claims from NPD DisplaySearch analysts, who have flip-flopped several times but now point to a thinner non-Retina iPad mini arriving later this year and a Retina iPad mini following in early 2014.

Today's report also reiterates claims that Apple's fifth-generation iPad is on its way with a thinner and lighter design inspired by the iPad mini. Apple's supply chain is reportedly beginning small-scale production on the new iPad this month, ramping up through October.

pmz
Of course they're not adding Retina to iPad mini this year. That would make absolutely no sense.

iPad mini will get spec-bumped along the iPad 5 release, but thats it.

Not that it makes any difference. 99% of iPad mini buyers are buying based on 1) Price, 2) Size. Most of them have no idea what 'Retina Display' even refers to.

That's not an insult, it is a market reality. As much as I personally would like a 7" Retina iPad....makes no difference.
Score: 14 Votes (Like | Disagree)

CooKieMoNs7eR
No retina, no buy, simple as that.
Score: 6 Votes (Like | Disagree)

Rogifan
This makes no sense to me. Why release an updated iPad mini in the fall if a new one will be coming out in early 2014? Unless Apple is moving to 6 month product cycles?
Score: 5 Votes (Like | Disagree)

jadot
I'll keep my current mini until the retina comes. Personally I don't have reason to buy into a new form factor.
Score: 5 Votes (Like | Disagree)

Sandstorm
Personally I don't need or want any sort of mini iPad. My current iPad 4 is mainly a couch device at home. Outside I'm satisfied with iPhone 5.

Thursday May 13, 2021 10:32 pm PDT by Sami Fathi
A new rumor suggests that Apple will announce the third-generation AirPods and the recently rumored HiFi, or high-fidelity Apple Music tier, on Tuesday, May 18, via a press release on its website. The new rumor comes from Apple YouTuber Luke Miani who shared the alleged exclusive news with the AppleTrack website. According to the YouTuber, Apple plans to release the next-generation AirPods...
Read Full Article • 139 comments