Shortly after Apple seeded iOS 7 Beta 3 to developers earlier today, user Hamza Sood (via 9to5Mac) discovered toggles in the beta's "Accessory Developer" settings that allow for iOS 7's "iOS in the Car" initiative to work over Wi-Fi in addition to USB. 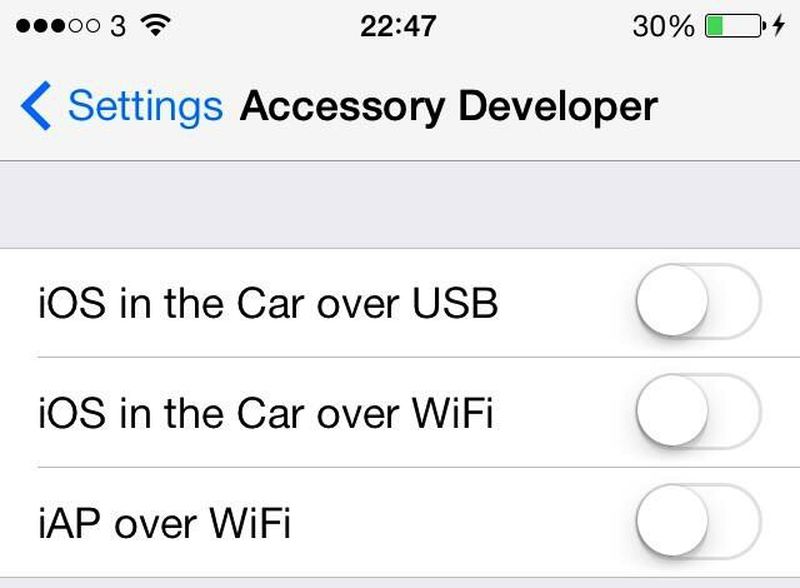 iOS in the Car is an initiative Apple revealed at its Worldwide Developers Conference keynote that provides enhanced iOS integration in automobiles, displaying iOS on in-car monitors to make calls, get messages, look at maps and more.

While it was largely assumed that iOS in the Car would work over a wired USB-to-30-pin or USB-to-Lightning connection, it now appears that iOS in the Car may be available at great convenience with users not having to take their devices out of their pockets or bags to instantly connect to their automobiles, which would have to be outfitted with AirPlay or Wi-Fi to take advantage of the feature.

Major car manufacturers that plan to support iOS in the Car include Honda, Acura, Mercedes-Benz, Nissan, Infiniti, Ferrari, Chevrolet, Hyundai, Kia, Volvo, Opel and Jaguar. The feature is expected to roll out in 2014 following the launch of iOS 7 this fall.

Leehro
iAP is the iPod Accessory Protocol (http://mfi.apple.com/faqs#1-1). It's how iOS devices communicate with external accessories, historically over the dock connector or bluetooth.
Rating: 4 Votes

Steve J0bs
I wonder if there will ever be a way to install a new head unit that would be capable of iOS in the Car? If not, i guess it would be a cool DIY.
Rating: 3 Votes

Robert.Walter
Where the hell is Ford & Lincoln?

Ford might have been an early-mover with its Microsoft based Sync, but the world has moved-on and the market has spoken, and MS, Windows Phone, and Sync are not it.

Ford, you have been slammed in customer reviews and surveys for the lousy performance if Sync, such that you have had to start adding knobs back into your best seller vehicles.

Time to realize you are the maker of fine cars and bury your connectivity wet dream and move to iOS before your competitors steal a march on you. (Or did MS tie you up and tie you down?)

One clear way to demonstrate to the market that you get it is to move off platform to a new one.
Rating: 2 Votes

Why is't BMW in that list?
They were one of the first with ipod/iphone support?


Yeah...and what about Lexus/Toyota?
My next car might not be a Lexus unless they step it up!!!
Rating: 2 Votes

dannys1
Why is suddenly any connection over wifi called "airplay" - Apple are not referring to it as Airplay so why is Mac Rumors? Presumably iOS in the car is not just the output of the iPhone onto an external monitor. I presuming you can use the monitor and the radio to do other things too, otherwise what would be the point of it?
Rating: 2 Votes

I am REALLY looking forward to this.

Toyota (and therefore presumably Lexus) was originally on the list presented at WWDC if I remember correctly. Not sure why it's not on MacRumor's list.


Toyota wasn't. I was looking for it specifically because that's what I always buy. Switching to Nissan now if Toyota doesn't get with the program :p
Rating: 1 Votes

newagemac
I am REALLY looking forward to this.

Yeah...and what about Lexus/Toyota?
My next car might not be a Lexus unless they step it up!!!


Toyota (and therefore presumably Lexus) was originally on the list presented at WWDC if I remember correctly. Not sure why it's not on MacRumor's list.
Rating: 1 Votes

tasset
This signals to me that Apple has two strategies on markets:
1) If it cannot walk in and flip an industry on its head (like music and mobile) it will develop strategic partnerships. This seems to be the case with AppleTV, social network integration, and now automotives. Bad for us in that it helps supplement the status quo rather than disrupt, but good because Apple will assuredly be more universally accepted by 3rd parties than Android.
2) If it can make an immediate impact it will hold out on technologies until an industry is flat-footed. I hope this will be the case with wearables (iWatch), gaming on AppleTV, and mobile payments (Passbook).
Rating: 1 Votes
[ Read All Comments ]