Inventories of the Apple Thunderbolt Display are dwindling at some third-party resellers, according to a report from MacTrast. The site spoke to a number of retailers including MicroCenter, Fry's, CDW, Best Buy, MacConnection, and others.

Several stores said they had limited stock, while a number more said they were backordered or otherwise completely out of stock. One retailer, Adorama, went further, saying the Thunderbolt Display was "no longer available".

MacTrast called their customer support line and were told that "the manufacturer is no longer allowing us to order new inventory for this item, and it has been removed from our system". 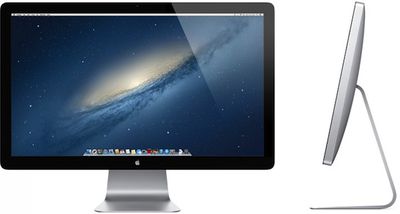 Shortages of products at third-party resellers can occasionally be an indicator of a future refresh or discontinuation, but for a low-volume product like the Apple Thunderbolt Display, we can get mixed messages.

For example, this past January, AppleInsider reported similar shortages of the Thunderbolt Display at third-party resellers, but 6 months later, there is no replacement for it.

Regardless, redesigned Thunderbolt displays are expected at some point, perhaps alongside the new Mac Pro which is expected later this year. Potential features for a revamp include Retina capabilities, support for Thunderbolt 2, USB 3.0, and the MagSafe 2 connector that was introduced last year. The display may also be redesigned with the thinner profile and new display assembly process that Apple introduced with the new iMac late last year.

komodrone
nah, all of you got it wrong. it's just going to be the same TB display but thinner.
Score: 14 Votes (Like | Disagree)


OMG, could you image the "Apple" price for that? Probably close to 4K
Score: 6 Votes (Like | Disagree)

Not at a decent refresh rate, no. Only with Thunderbolt 2 (not released yet) we'll be able to achieve real 4K at 60Hz.

Perhaps Thunderbolt 2 is the reason why the rMBPs haven't been refreshed yet.

I'm hoping for a 2880p Retina Thunderbolt display though, even if it's not released this year. 4K at 27" would imply a reduction in real estate once you turn HiDPI on. It'd be perfect for a 21.5" Retina iMac though.

a.gomez
I guess for the handful of people who care (and do not know any better) Apple has not made a decent monitor in years - just let it die.
Score: 3 Votes (Like | Disagree)
Read All Comments