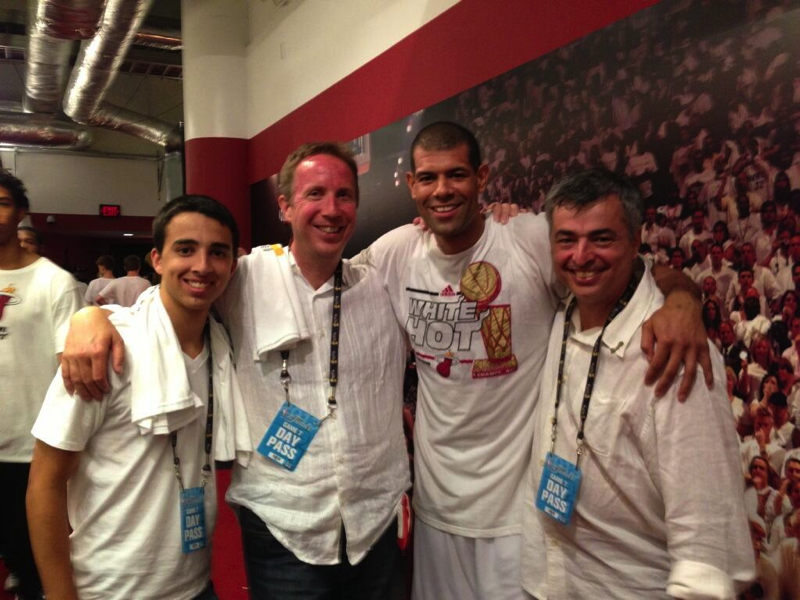 From L to R: Spencer Cue, Duke Senior Associate Athletic Director Mike Cragg, Miami Heat player Shane Battier, Eddy Cue
Battier played basketball at Duke before joining the NBA and Eddy Cue is a huge Duke basketball fan. Cue has posted a number of pictures of himself at Duke athletic events on his Facebook page. Cue earned his bachelors degree in Computer Science and Economics from Duke and his son Spencer is attending the school, while his son Adam graduated recently and is working on the popular email app Mailbox which was recently purchased Dropbox.

A Duke student group recently wrote of visiting Cue at his office at Apple's Results Way campus in Cupertino, saying it was decorated with Duke memorabilia:

Walking into Eddy Cue’s office, it is impossible not to notice that he is an avid Duke Basketball fan. My roommate, Michael Marion, recalls regularly seeing him at basketball games in Durham. His walls were full of pictures of the team. After asking us about our majors, he led us to a nearby conference room where we could all sit down.

hellomoto4
MacRumors: New and rumors that you hardly care about.
Rating: 10 Votes

iMikeT
Good for him but I hate the Heat, well more LeBron James really so boooooo!!!!
Rating: 9 Votes

MacRumors: New and rumors that you hardly care about.

ValSalva
Life at the top. Enjoy it while you can :)
Rating: 4 Votes

Do I need to be reading this? I'm sure this isn't an Apple rumour, correct me if I'm wrong!


So what? It's nice to read articles like this from time to time. You guys act like this was the only thing they posted all day.

If it doesn't interest you, feel free to not read the article.
Rating: 3 Votes

Grow up. What did they do to you? I never understood angry sports fans.

PS, it's a school, not just a basketball team.


Some people don't get that.
Rating: 3 Votes

I feel my faith in Apple waning
Rating: 3 Votes
[ Read All Comments ]