Apple recently updated its "Optimizing Apps for iOS 6"developer page with a new pie chart highlighting the lack of fragmentation among iOS versions being run on active mobile devices (via AppleInsider). According to the chart, 93% of iOS devices accessing the App Store over a two-week period ending on June 3 were running some version of iOS 6, with 6% running iOS 5 and just 1% running earlier versions of the operating system software. 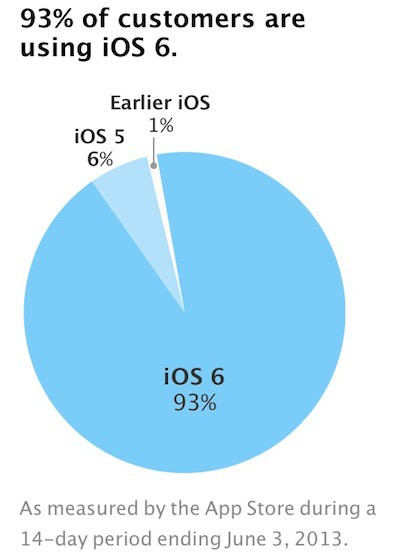 Apple's chart appears to be a direct jab at Google, which has long published its own pie chart that currently shows just 33% of devices visiting the Google Play store over the same time period running the company's latest Android 4.1-4.2 Jelly Bean versions, which began appearing last July. In fact, the most popular version of Android remains 2.3.x Gingerbread, which first appeared in December 2010.

Apple executives have increasingly focused on Android's fragmentation as a major weakness of the platform, with developers having to target many different versions of Android and numerous different devices with their apps. Apple contrasts that experience with developing for iOS, which supports a limited number of display sizes and for which the vast majority of users are running the most recent major version.

RolyPolyBird
How many of us smug bastards are going to be linking this story to our android friends? :)
Score: 60 Votes (Like | Disagree)

NanoTubeReturns
Android is the new Windows
Score: 58 Votes (Like | Disagree)

It's going to be more fragmented now once iOS7 is released. I have a feeling adoption rates will not be as high as previous iOS, people are afraid of change.


I think this is going to be the fastest adoption rate on record.
Score: 41 Votes (Like | Disagree)

ArtOfWarfare
As someone who has developed for Android and iOS, I can tell you first hand, the fragmentation effing sucks. Google does pretty well at helping you manage it, but it still takes at least twice as long to write and test code to run on all Android devices as it does to do so with iOS devices.

And with the much smaller payoff... why bother? You're spending a lot of effort to get your app in a market that's only willing to spend 10% of what iOS users are.
Score: 34 Votes (Like | Disagree)

Yeah but all of iOS's new features aren't available on all devices. iOS will have even more features that won't be available on older devices.


So what? This article isn't about hardware or features. This is about developers being able to count on API consistency.
Score: 31 Votes (Like | Disagree)

My Gosh! who dubbed those Android codenames?