After Apple debuted iOS 7 on Monday, the website for the new operating system displayed a set of icons that were different from the icons found in the current version of iOS 7.

"Old" iOS 7 icons
While it has been suggested that the icons represent future design changes that Apple is planning for iOS 7, it is more likely that the icons are previous iOS 7 design iterations. Because the icons were present on the website when it went public on Monday, it is reasonable to assume that the icons were the result of outdated and overlooked marketing material rather than an unintentional leak of new content.

The "old" weather icon, for example, forgoes the current sun and cloud icon of iOS 7 for a simple number, "73." That is the same temperature icon that is used for the iOS 6 version of Weather, so it is probable that the text-only 73 was an older, simpler design iteration taken from the current iOS 6 icon. There is no indication that the icon represents a live temperature reading.

Current iOS 7 icons
Passbook, too, looked notably different in the older version, with a confusing color scheme that heavily featured blues and greens. Reminders was updated as well, swapping out gray for green and yellow for orange, both of which are bolder colors. Arguably, the newer versions of the apps feature crisper designs and more prominent, easy to distinguish colors.

Though it is unlikely that the icons represent upcoming designs, it is likely that iOS 7 will see several graphical updates before it is released to the public this fall. As noted yesterday by The Next Web, the current design is a "work in progress."

ipedro
I'm confident that Apple will adjust things as they move closer to release. They're not submitting iOS7 to developers 3 months early so that they can ignore all their requests. Some app icons seem to have been universally rejected so they'll be getting a flood of feedback on them.

The camera app is one of them. If they're going to drop skeuomorphism, then don't take half measures. Get rid of the old camera metaphor and use one that better represents cameras today: a lens works well. 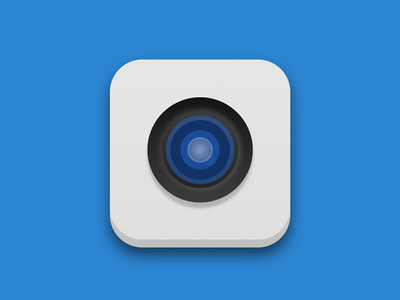 Matrixfan
First time I have ever been disgusted by an Apple product.:mad: I was expecting Apple to do away with the extreme skeumorphic stuff here and there, but this neonfest and ugly icons are horrible. I have a feeling all of this is in effort to gear up for the chineese market. As a european, It goes all the way against my taste.
Score: 32 Votes (Like | Disagree)

For me, the Photo's icon is meaningless and does not suggest intuitively, that it is a Photo App.


Neither did a sunflower. But we learned.
Score: 24 Votes (Like | Disagree)

Hate it? Keep the criticisms coming, but don't freak out. Detail your concerns in a detailed manner and more importantly let Apple know by submitting feedback here (http://www.apple.com/feedback/)

Love it? Let us know but don't worry! Throughout the coming design iterations the grand vision of what we've seen won't ultimately be scrapped or changed in a major way again for quite some time. Better yet tell apple here (http://www.apple.com/feedback/)

After seeing so much hate on Apple and other users of this forum for the biggest change to the iPhone since it came out, it makes me kind of sad. Let's please have some respect for other people's opinions and for each other!

No, The icons ARE Bad, Ugly, Confusing and Inconsistent. :mad:

I still I can't wrap my head around the idea that the best industrial
designer Sir Ive would even consider these fugly icons let alone
approve it.

The whole "Translucent UI" on Notificaton and Control Center gives
me headache.It's difficult to read text easily when the background
app is too noisy. The ultra thin 'Helvetica Neue Ultra Light' font
which is used system wide is anotherthing that doesn't make it easier
to read. There are too much white space in the OS which is not easy
on the eye either. And the iMessage app is too ugly to even be on the
Windows Phone.

There are some good UI feature in the new iOS. But nothing terribly
new. Most of the UI is sadly copied form Windows Phone OS, WebOS,
Android and also Jailbreak Tweaks and then combined together. Which
isn't necessarily a bad thing but didn't work out well in this
instance.

To quote The Verge's Joshua Topolsky, "The design of iOS 7: simply
confusing". And It's only gonna look worse on the iPad which is my
real fear.

My complain is only with some of the UI design. Not the functionality.
I love how iOS 7 works and super excited about it.

I'm just hoping Apple Improve some of these UI before the final public
release. But I seriously doubt that would happen. As history teaches
us once Apple takes a decision they generally stick with it no matter
what...

Also wanted to add on the news that Jony Ive reportedly had Apple’s
marketing team design iOS 7 icons... I just don't buy it.

Jony Ive clearly said in the video they 'Developed' the 'Grid System'
to design harmonious icons. They also
showed their design philosophy of the icons in the video and Web site.
So it was well thought out.
Plus there is a section in Apple's new iOS7 marketing video where Ive
specifically talks about how beautiful the new icons are, so he
obviously endorses them on some level.

It's funny how they brag in the video about beautiful icons and they
are so ugly in reality. It's just not something I think worthy of being
an Apple Product.

The news sounds like a great excuse for a terrible reception to their
horrible icons. I like a lot about the new UI and I'm super excited
about the functionality, but the 'Icons all symmetrically aligned to a
grid' crap was embarrassingly bad. They just look awful.

Its not the end of the world though. They just need to get some
consistency happening, and ditch the ugly icons like Game Center,
Safari and the Camera altogether.
Score: 20 Votes (Like | Disagree)
Read All Comments