In iOS 7, Apple has included a new Notification Center feature called Today, which the company says is designed to provide users with the day's events at a glance, including information like birthdays, weather details, and traffic reports. 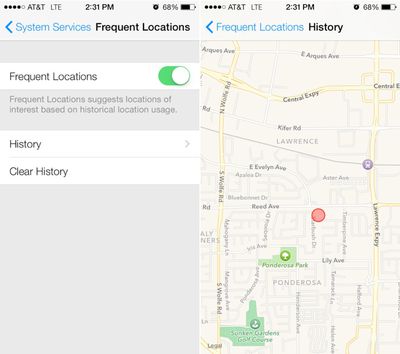 Frequent Locations stores information about locations that have been visited multiple times and it appears to pair with another "Traffic" setting to provide commute details on locations a user visits on a regular basis, as seen in the screenshot below. It is unclear, however, if these traffic notifications appear based on the time of day. For example, they could appear only during a morning or evening commute to work.

Users have found other interesting items in the 'Today' panel, including a suggestion of an early bedtime for an upcoming busy day.

It appears that location settings in iOS 7 have a wide range of capabilities, which could see the Notification Center including even more detailed information as iOS 7 evolves. In a report earlier today, The Next Web estimated that iOS 7 would see a number of design changes before being released this fall. We have additional details on iOS 7, including major changes, small updates, and new APIs.

(Thanks Olivier and John!)

crossifixio
I found this amusing as well! My phone is telling me to go to bed!
Score: 45 Votes (Like | Disagree)

musika
This is the kind of stuff I like to see Apple adding to iOS. The today feature is great. It also tells you what time your alarm is set for, too.

_Refurbished_
"Today, you can go on MacRumors to complain about iOS 7 icons."

You mean that it is a perfect rebrand of Google Now... right?

It seems from now onwards we don't need to guess any rumour for future updates... just list the most popular ones after each new version... and there you go, implemented in the next innovative, amazing, incredible, phenomenal, never seen before iOS

so when everyone else does it is stealing, copying...etc - but when it is Apple we need to use "competitor"

I guess the dumbing down of Apple by iOS is almost complete.

Can we please put an end to this nonsense? I'm so tired of having to read through dozens of "who stole what from whom" posts. Apple innovates. Google innovates. Google Now was innovative. Today innovates on top of Now. You're not going to win this argument. Nobody is. Can we stop?

This argument doesn't even belong in this thread. If the thread was "Apple wins innovation award for Today feature", then you'd have a beef. It's not. This thread is about including traffic information in a feature that is similar to one provided by Google. Most people don't really care where the good ideas come from-- they just want to benefit from as many as possible. If you're carrying in a grudge from another thread, please just quote this article in that thread and continue your argument there.

DisMyMac
Great feature. Reminds me of this....