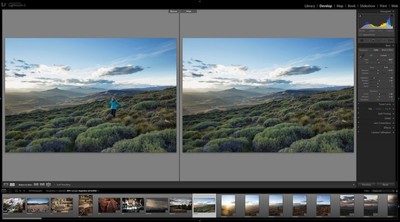 Lightroom 5 Advanced Healing Brush (Click for larger)
Adobe highlights six major new and improved features found in Lightroom 5, as well as a number of other smaller features designed to make the software more powerful and efficient than ever.

- Advanced Healing Brush: Remove distracting elements with a single brush stroke. Adjust the size of the brush and move it in precise paths. Unwanted objects and flaws—even those with irregular shapes like threads—just disappear.

- Upright tool: Straighten tilted images with a single click. The new Upright tool analyzes images and detects skewed horizontal and vertical lines, even straightening shots where the horizon is hidden.

- Smart Previews: Easily work with images without bringing your entire catalog of original images with you. Just generate smaller stand-in files called Smart Previews. Make adjustments or metadata additions to the Smart Previews and apply your changes to the full-size originals later.

- Improved photo book creation: Create beautiful photo books from your images. Lightroom includes a variety of easy-to-use book templates, and now you can edit them to create a customized look. Upload your book for printing with just a few clicks.

- Video slideshows: Easily share your work in elegant video slideshows. Combine still images, video clips, and music in creative HD videos that can be viewed on almost any computer or device.


Lightroom 5 is priced at $149 as a standalone purchase, with upgrading pricing of $79 available to current Lightroom users. Subscribers to Adobe's Creative Cloud service will also receive access to Lightroom 5 with their memberships.

Lightroom competes with Apple's Aperture software, which is available on the Mac App Store for $79.99. Each successive version of Aperture has seen Apple reduce pricing, moves that drove Adobe to slash the price of Lightroom in half to $149 with the release of Lightroom 4 last year. But with no sign of a new version of Aperture and Apple continuing to price Aperture 3 at $79.99, Adobe apparently remains comfortable with its $149 standard pricing on Lightroom while it also seeks to transition users to its Creative Cloud subscription services.

Does anybody understand this? :confused:


Presumably, real men store their photos directly on disk, not a library, and edit out any imperfections with a hex editor.
Score: 16 Votes (Like | Disagree)

Presumably, real men store their photos directly on disk, not a library, and edit out any imperfections with a hex editor.

Real men do everything analog. That's why I wrap my monitor in Saran Wrap, and edit all my photos with magic markers.
Score: 12 Votes (Like | Disagree)

3282868
Check and mate, Apple. it's embarrassing that Aperture hasn't had a decent update while competitors are running circles around it.

We get it, iOS, iPads, iPhones, "Angry Birds", games, Facebook and Twitter are your bread and butter focus. Yet you once made great displays, powerful and current tech, and a great, stable OS. I'm not buying this post-PC era ****, try real work on a tablet. At most, they're entertainment devices and extensions for desktop systems. Market over-saturation and breaking into the Chinese market aren't doing well for that stock, and you lost the business/pro sect that supported you through your tough years. With Adobe releasing subscription apps, now's the time to get some of that market back, it adds up when businesses invest tens or hundreds of thousands at a time in upgrades.

David G.
Lightroom 5, the perfect way to get rid of your daughter in a photograph but not that annoying stick in the lower right hand portion of the image.
Score: 10 Votes (Like | Disagree)

I can't see Aperture 4 at WWDC. It's not a developer tool.


Does anybody understand this? :confused:
Score: 9 Votes (Like | Disagree)
Read All Comments

Wednesday June 9, 2021 8:23 am PDT by Joe Rossignol
While there are many great new features in macOS Monterey, several of them are not available on Intel-based Macs, according to Apple. On the macOS Monterey features page, fine print indicates that the following features require a Mac with the M1 chip, including any MacBook Air, 13-inch MacBook Pro, Mac mini, and iMac model released since November 2020:Portrait Mode blurred backgrounds in...
Read Full Article • 834 comments

Friday June 11, 2021 1:13 pm PDT by Joe Rossignol
On his newly launched Front Page Tech website, leaker Jon Prosser has shared renders showing off the alleged design of the next-generation iPad mini, which he says are based on schematics, CAD files, and real images of the device. In line with details shared earlier this month by Bloomberg's Mark Gurman and Debby Wu, Prosser claims that the new iPad mini will feature slimmer bezels around...
Read Full Article • 151 comments