Apple has raised the prices for the iPad, the iPad mini, and the iPod touch in its Japanese online store, Bloomberg reports.

Over the past several months, the Japanese yen has weakened in value, hitting ¥100.69 against the dollar earlier today, which is said to be the reason why Apple has increased its prices. 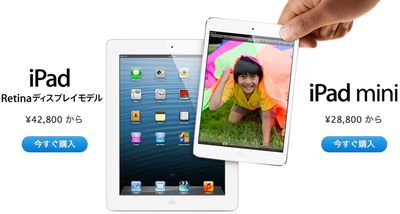 This is not the first time that Apple has raised the price of its products. In 2011, the company began charging more for all of its products in the UK in order to compensate for an increased VAT tax.

Note: Due to the political nature of the discussion regarding this topic, the comment thread has been moved to our Politics, Religion, Social Issues forum. All MacRumors forum members and site visitors are welcome to read and follow the thread, but posting is limited to forum members with at least 100 posts.

VAT supports Full Health Care for anyone in a VAT system. It's amazing how few people I know in Europe whine about the VAT. They tend to be Americans who don't mind getting all the medical and preventive care treatment while there--they just don't want to help pay for that treatment.

We call that freeloading.


Exactly! Being from the U.K., it amazes me the ignorance on socialized democracy systems and the amount of fear mongering that the general U.S. population feeds into. :mad:
Score: 12 Votes (Like | Disagree)

gnasher729
More than 20% change in exchange rate in the last 9 months, so a price adjustment seems justified.
Score: 12 Votes (Like | Disagree)


Means sales tax is only paid on the value add at each step in the supply chain, rather than the full price each time. Avoids the tax-on-tax issue of a cumulative sales tax. Its a more efficient and intelligent form of consumption tax.
Score: 10 Votes (Like | Disagree)

mdriftmeyer
VAT supports Full Health Care for anyone in a VAT system. It's amazing how few people I know in Europe whine about the VAT. They tend to be Americans who don't mind getting all the medical and preventive care treatment while there--they just don't want to help pay for that treatment.

We call that freeloading.
Score: 9 Votes (Like | Disagree)
Read All Comments

Friday May 20, 2022 12:18 pm PDT by Juli Clover
Sony this week came out with an updated version of its popular over-ear noise canceling headphones, so we picked up a pair to compare them to the AirPods Max to see which headphones are better and whether it's worth buying the $400 WH-1000XM5 from Sony over Apple's $549 AirPods Max. Subscribe to the MacRumors YouTube channel for more videos. First of all, the AirPods Max win out when it comes ...
Read Full Article • 147 comments