Research firm IDC today released new projections showing that the firm expects tablet shipments to surpass shipments of notebook computers in 2013, marking a significant shift in how consumers approach portable devices. IDC projects that the strong growth of tablets will continue into the future, allowing tablets to overtake the entire PC market in 2015.

"What started as a sign of tough economic times has quickly shifted to a change in the global computing paradigm with mobile being the primary benefactor," said Ryan Reith, Program Manager for IDC's Mobility Trackers. "Tablets surpassing portables in 2013, and total PCs in 2015, marks a significant change in consumer attitudes about compute devices and the applications and ecosystems that power them. IDC continues to believe that PCs will have an important role in this new era of computing, especially among business users. But for many consumers, a tablet is a simple and elegant solution for core use cases that were previously addressed by the PC." 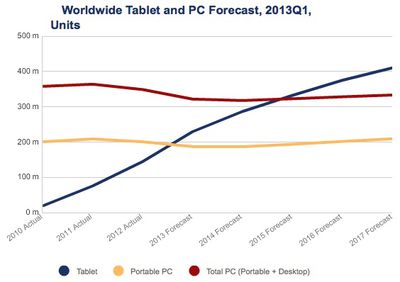 While Apple has remade the tablet market with the iPad, IDC notes that a proliferation of low-cost Android tablets is driving overall growth at this point. Apple's efforts have also shown that tablets are viable tools for the education market, opening up significant possibilities for sales growth.

"Apple's success in the education market has proven that tablets can be used as more than just a content consumption or gaming device," said Jitesh Ubrani, Research Analyst for the Worldwide Quarterly Tablet Tracker. "These devices are learning companions, and as tablet prices continue to drop, the dream of having a PC for every child gets replaced with the reality that we can actually provide a tablet for every child."

The success of tablets is undoubtedly coming as no surprise to Apple, as its executives have said a number of times over the past several years that they expect the tablet market to exceed that of PCs.

iKane
I know it's inevitable but I hate this. Until I can do simple things effortlessly on my iPad it will never be a viable alternative to my MacBook Pro. Just the process of trying to send an email with attachments other than just photos/videos is an absolute chore. On OS X, it's a piece of cake. I can add whatever I want to an email, on iOS I have to search for an appropriate app and hope it does what I want.

At this point I'm seeing a MacBook Air as a much better option for on the move computing. If it had 3G built in I would buy it yesterday.
Score: 7 Votes (Like | Disagree)

firewood
More people buy small cars than trucks and horse carriages these days. And in many places, including big university campuses, there may be a lot more people using bicycles and scooters than cars.

That doesn't mean that bicycles have replaced horses, truck tractors and airliners. Just that less people use them less often. There are a few, but very few people play polo, deliver refrigerators, or prepare photo spreads for National Geographic. Maybe you're one, but you'll have to pay for your tools. Not expect grandma to support the economy of scale necessary to make your horse stables, Peterbilt tractors and Bugattis cheaper.

IBM still sells mainframes. Not many and they are not cheap. The typical programmer hasn't seen one in decades. Thus heads the full tower desktop PC.
Score: 6 Votes (Like | Disagree)

JarJarThomas
I am a gamer.
And as long as i am a gamer i want a big fat desktop for gaming.
Consoles are just not good enough (no mouse, no multimonitor stuff, and as far as i can see it, even the new ones have less grafic power than current pc cards).

macFanDave
Most people don't need computers -- they just need Internet appliances. They are strictly consumers of content and even if they have some urge to create, their basic needs can be met with simple Web-based tools.

People who program, those who require powerful apps to do their work and people who create sophisticated content are among the only ones that will continue to need full-pledged computers.

Fortunately, Apple makes the best tablet and those who value the superior user experience will continue to pony up for an iPad. We can't be bothered with the hordes of cheapskates.
Score: 3 Votes (Like | Disagree)

People have been saying pc gaming is dying for years, when is it going to actually happen?


You're about to see another resurge of the death of PC gaming arguments now that a new generation of consoles is about to come out.

As long as there is still a considerable PC market, there will be games made for it. However if this trend of the media consuming masses shunning traditional computers continues, then publishers will respond by paying less and less attention to them. This would be a gradual decline, rather than something which happens overnight. Much like what has happened to arcades.


It won't be anything like the arcades. The consumer PC market, which is what's most at danger from the tablets, has never been a part of the PC gamer market. Even when they fall by the wayside, the PC gamer niche will likely still be buying towers and powerful AIOs like they always have.

The PC in general isn't going to die. It's going to become much like it was in the mid-late 90's. A market for professionals and enthusiasts.
Score: 2 Votes (Like | Disagree)


I cringe whenever I read these four words. The way I see it is that unless you own a research company, don't presume to tell me what "most people" do. :mad:
Score: 2 Votes (Like | Disagree)
Read All Comments