Tonymacx86 points (via 9to5Mac) to recently discovered photos of a Broadcom BCM94360CD Wi-Fi/Bluetooth card that supports the 802.11ac "Gigabit Wi-Fi" standard rumored to be coming to Apple's Mac lineup later this year. While the photos were posted to Chinese site VR-Zone in early March, they are only just now being noticed by those following Apple rumors. 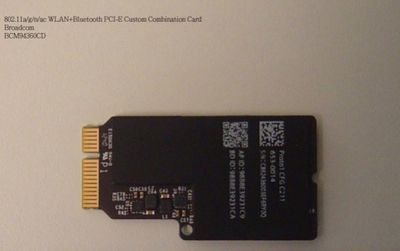 While the reports suggest that the new card is intended for the next-generation MacBook Pro or MacBook Air models rumored for launch at next month's Worldwide Developers Conference (WWDC), a commenter on the Tonymacx86 discussion thread points out that the card is actually nearly identical in size, shape, and layout to the Wi-Fi/Bluetooth card found in the current iMac.

The BCM94360CD card, which is very likely a custom design for Apple, contains Broadcom's BCM4360 802.11ac transceiver chip, offering support for the in-process Wi-Fi standard that allows for triple the speeds of the current 802.11n standard. An apparent date code of "1240" on the part suggests that it was manufactured in early October 2012, several months before Apple was reported to have struck a deal with Broadcom to bring 802.11ac support to its 2013 Macs.

quagmire
Stop the presses, a leaked part is for a Mac and not an iOS device? :eek:
Score: 23 Votes (Like | Disagree)

JaySoul
Will speeds ever become so fast that we would actually be able to see things before they happen?
Score: 7 Votes (Like | Disagree)

Kind of like Megapixels in cameras. The makers were, and still are to a certain extent, pushing higher and higher pixel counts even though after a point picture quality does not really improve and there are other things that can be changed about the sensor that are more important.

With respect to you I disagree completely with your comments.

Faster WiFi is very important to me. I store all my media be that Movies, TV Shows or Music on a NAS, it's easier to backup that NAS and access my media on all my devices and my wifes devices.

WiFi, specifically 802.11n is good for this activity but it's not great. HD 1080p video requires large buffer pools on the client side. It is not possible to directly stream 1080p without a 20MB or larger buffer due to the slow speed of 802.11n WiFi, the problem is exasperated by distance and interference.

Many of us do not keep our Wireless Routers in the same room as our HDTV's.

And there is another thing too, Backups. Time Machine Backups that require GB's be transferred per day dependant on how many files changed take a long time over WiFi.

Keep this in mind although 802.11n is 300Mb/s to 450Mb/s (dependant on radio generation) that is only Mb - Megabit speeds. Not MegaByte. The difference is huge because we don't store files on our PC's in Megabit sizes. A MegaByte is 8x larger than a Megabit.

This means that even if you were able to get the full 300Mb/s transfer speed (which is unlikely in the real world) you would still only manage 37.5MB/s file transfers within your home network. This is incredibly slow for performing an initial Time Machine backup or even daily backups and forget about moving large files from PC to PC without waiting 10-20 Minutes.

This is where AC comes in. It boosts speeds to between 900Mb/s and 1.3Gb/s - This pushes MegaByte speeds to between 112MB/s and 162MB/s - That is a huge difference and even if we don't get those speeds in the real world we can expect at-least a 2x increase over 802.11n - We are talking 75MB/s on a bad scenario, just 600Mb/s transfer speeds.

So I hope this helps you understand why some of us are excited about 802.11ac some of us don't want to plug 1Gb ethernet in to our notebooks, some of us want to go fully wireless without any drawbacks like heavily buffered video with slow scrubbing, file transfers that you need to plan your workflow around due to their completion times and backups that strain or saturate your wireless connectivity.
Score: 6 Votes (Like | Disagree)

The capitalization of the word "Surface" in the headline is confusing. It makes it look like "iMac Surface" is a product name.
Score: 6 Votes (Like | Disagree)

Could we please stop it with the 802.11 AC hype because quite frankly you'd swear that people here actually think they'll reach said speeds in normal conditions. Check out the following article on 802.11 AC:

I'd sooner an adoption of a lower frequency that provides better coverage than having the sort of showing off of technology that rarely meets the hype on which the marketing department seems to be hell bent on pushing.

I do not even know what to say to the two of you :confused:


How can you not see the difference? More than double the speed?

Not to mention the 450 Mb/s on n is only if you have the 2-3 antennas and the high end routers. Bring the actual speed of the current standards down to less than 10MB/s

The difference is HUGE for those that have a NAS at their home. Wifi AC makes NAS useable over Wifi, not to mention computer to computer transfers amazingly faster. Especially useful on Mac's with Airdrop.

Useless to most. You'll never see real world usage above 802.11n, and hard drives need to move to solid state before this is really taken advantage of.

The capitalization of the word "Surface" in the headline is confusing. It makes it look like "iMac Surface" is a product name.


The CApiTALizatioN iS corRECT.

It is just a poorly worded headline.
Score: 3 Votes (Like | Disagree)
Read All Comments