Late last year, Philips launched its "Hue" lighting system, offering sets of wireless-enabled LED lightbulbs that allow users to remotely control their lighting, including adjusting to a rainbow of colors, from an iOS app. Hue has been exclusively sold through Apple's online and retail stores, and Philips has been working hard to both bring more features to the system and to open it up to developers to build even more functionality. 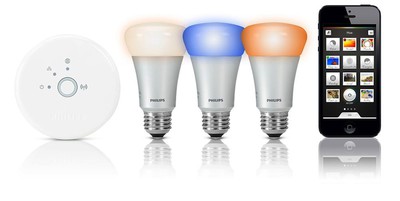 Philips today announced the "next phase" of Hue with a major update bringing a number of new features. Perhaps most interesting is integration with If This Then That (IFTTT) protocols to allow Hue to provide visual alerts for a wide variety of situations.

The next generation of the Hue app (version 1.1) can now hook up to your essential internet services via your smartphone or tablet, meaning your bulbs can act as indicators for weather, stock quotes, sports scores, email, social media and more. They can be set to behave in any way you choose. For example, to change color if it’s going to rain; to blink if you receive an urgent email, Facebook message from someone special; illuminate gradually as the sun sets; or even flash in your sports team’s colors when they score.

The new Version 1.1 of Hue also adds geofencing, automatically turning lights on as the user approaches their home and turning them off as they leave, as well as other customizable options. The update also brings recurring schedules, allowing users to simply set a schedule once and have it repeat each day.


Philips is also announcing an expansion in availability for its Hue lighting system, with a number of new outlets including Apple resellers and Amazon.com now offering starter packs and individual bulbs.

The Hue starter pack ($199.95) with core hardware and three bulbs and single bulbs ($59.95) are available through Apple. The Philips Hue universal app for iOS devices is a free download from the App Store. [Direct Link]

MultiMediaWill
Still waiting for a price drop. Not paying $200 for light bulbs.
Score: 27 Votes (Like | Disagree)

xdhd350
Gimmicky to some... life enabling to others. Think of someone who may be deaf. There have been lights for phone ringers for decades because it didn't require a whole lot of technology.

What if these could hook into an intelligent alarm system? Flashing some unique pattern to warn the deaf occupant of a time critical situation.

There is a multitude of good that this tech can be used for, beyond the gimmicky stuff.
Score: 21 Votes (Like | Disagree)


Yep. Let's all go back to living in caves. We don't really need electricity, hot water, television, internet, fridge-freezers etc, do we?

I gotta get me some of these.

That is just cool.

Sonds great and I think this may fit well into my cool apartment.

I love it when companies do cool things with the iPhone.

Madhatter243x
Saving money is cool too.

Energy costs would be higher for traditional lighting sources base on the US average of $0.12 per kWh.

The Philips hue is half the price of using INC lamps with ten times the coolness factor.
I have it... I use it... I like it!
Score: 11 Votes (Like | Disagree)

tigres
I gotta get me some of these.

That is just cool.
Score: 11 Votes (Like | Disagree)
Read All Comments